Last year, the Missouri State High School Activities Association announced the best-of-3 style would be going by the wayside.

Valle Catholic head coach Nancy Fischer is pleased with how the Warriors have handled this adjustment.

“We have adapted very well to playing the 3-of-5 format,” Fischer explained. “All of our matches this year, save for one (the home match versus Festus), are being played using that format.”

Fischer said playing these individual weeknight matches with the best-of-5 format is logical — especially with postseason matches slated to use it. 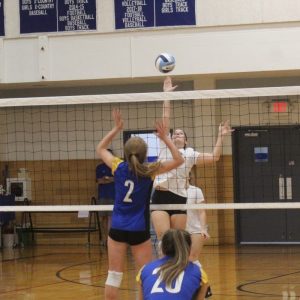 “I felt the match with North County was very competitive,” Fischer stated. “Scores are sometimes not good indicators of the ‘closeness’ of a match. We were fortunate to play consistently good volleyball.”

Hannah Fowler finished off the Raiders in the second set with a cross-court kill, and the Warriors kept that momentum going in the third.

Mia Weiler, Siebert and Joggerst all had lengthy serving runs during the third set, and the Warriors were up 24-9. North County scored several points late; however, the Raiders committed a service error to give Valle Catholic the match.

This past weekend, Valle Catholic wrapped up a mighty busy week by playing in the Jackson Tournament — and the Warriors reached the Gold Bracket championship.