Although the lack of a quorum did keep the St. Mary Board of Aldermen from voting on a Fiscal Year 2021 budget, the board and Mayor Carlton Wyatt did see another problem appear to be straightened out.

While Aldermen Dr. Zen Duda and Ron Barnett were unable to attend, Curtis and Alan Picou, new owners of the historic Laubaugh Building, did come, after missing a scheduled appearance at a meeting two weeks earlier.

Although an official meeting could not be held, Wyatt, Alderwoman Annette Hacker, Alderman Karl sSchultz and city manager David Woods spent about 25 minutes discussing the property with the Picou brothers.

The mayor and aldermen had been irritated two weeks earlier, when Curtis Picou or an associate failed to respond to a summons to attend a special Sept. 10 meeting. The board had several concerns and issues with the placement of two huge plastic shipping containers that had been placed on the property – right on to pof waterlines.

The brothers assured the officials that things would be taken care of to their satisfaction. 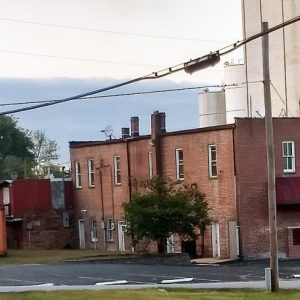 “We’re going to get them off of the water lines, I think they said seven and a half feet off the waterlines,” Curtis Picou said, and move them over to the side. We’ve got enough room to get them on the gravel lot before the asphalt.”

“That’s strictly up to you on that,” Wyatt said. “The only time we get involved is if it’s over the lines or within 10 feet of the boundary line you have to get permission.”

The brothers were apologetic for the miscommunication the previous meeting.

“I apologize for not making the last meeting,” Curtis Picou said.

Wyatt asked whether they plan to open a business there.

“I really don’t know,” Curtis Picou said, noting that he and brothers Alan and Mark had not yet decided what its ultimate use might be.

“We thought that would be nice for storage and maybe we could do something with it one day,” Picou said. He noted that rehabbing and using the first floor of the often-flooded building would be complicated due to floodplain issues.

“We think that upstairs hall could be cleaned up and sort of revamped the way it was and you could rent it out for receptions,” he said. “Or stuff like that. That would be a nice thing for the town.”

Hacker said she had gone upstairs in the building recently and agreed with the second floor’s potential.

Wyatt stressed that the city was not opposed to the property being developed.

“Don’t get me wrong,” he said. “We welcome this. I don’t want it to look like … being city officials, we have to go by guidelines and the flood zone because of our insurance. I know how it is in that flood zone.”

He added that the city has to go by the floodplain rules.

“One thing I recommend is, before you do anything, check with David,” Wyatt said, noting that the situation could have been avoided if they had approached the city before-hand.

“A lot of people don’t realize every town’s got an ordinance on building,” the mayor said, “but you get in a flood zone you can’t hardly put two two-by-fours together.”

“We’ll make sure we get with David if we take any steps, Adam Picou said. “Right now we’ve just been kind of cleaning up. There’s some rotten floors in there we’re trying to remove. That’s part of the reason we got those shipping containers. We got those so we could store a few things for the building and some of the stuff that we clean out of there, so they don’t get ruined.”

A car left on the lot was also mentioned. Wyatt said if it is there more than 30 days, it needs to have city stickers and a current license. It belongs to a friend of their brother Mark.

An old muscle car is inside one of the containers, Picou said. He asked if that was permissible.