The city of Ste. Genevieve has a noted tradition in the sport of cross country.

However, the community doesn’t feature a high school meet as part of the competition calendar — in part because Pere Marquette Park simply isn’t large enough.

The park is big enough for a middle school meet, and Ste. Genevieve’s young runners were tested by steep inclines and a couple of loops around the grounds during a competition on Tuesday, Sept. 22.

Ste. Genevieve was able to have this meet, even with the impacts of the COVID-19 (coronavirus) pandemic.

Ste. Genevieve High School assistant principal John Boyd, Jr., and his father, John, Sr., drove an all-terrain vehicle around the park as a guide for the runners.

Sierra Boyd was very pleased with the performance of the middle school runners, which included a 17th-place finish on the girls’ side for Bailey Ervin — who received a medal for her performance.

For the boys, Trey Bloom finished 41st and Gavin Gegg was 52nd. Runners were given their times; but only places were officially kept.

The boys’ also excelled with a second-place team finish, with the junior varsity squad taking third in its division.

“Those weren’t our fastest times of the year; but, considering how hilly the course was, we ran amazing,” said Valle Catholic coach Samer Zoughaib. “The best part of the race is we packed and ran close to each other.” 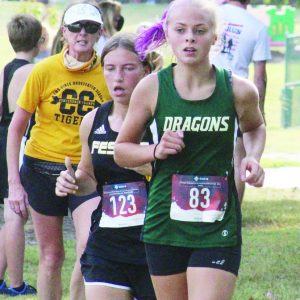