The Ste. Genevieve High School volleyball team has four seniors as part of its 2020 edition.

Each one of the seniors brings a different dynamic to the floor, and the Dragons celebrated their accomplishments this past Thursday with a special “Senior Night.”

Ste. Genevieve then dispatched DeSoto, a school with the same mascot and colors of the “hometown” team, by scores of 25-20, 25-11.

“They’re all hard workers,” said Ste. Genevieve head coach Carla Basler, who has been with the group for the past several seasons. “They all lead by example.” 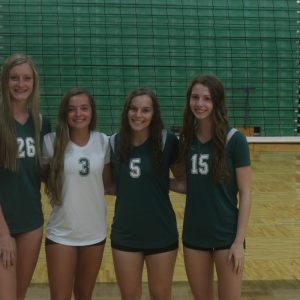 Brittney Kreitler has transformed herself into one of the top setters in southeast Missouri. Marysa Flieg can be dominant along the front row. Maci Reynolds was moved to libero last season, and she’s defensively sound. Jaden Wehner has been a role player for the Dragons.

Ste. Genevieve (6-1) volleyball players took care of business with two convincing wins last week, and the girls didn’t let the pomp and circumstance of Homecoming serve as a distraction. Three of the girls were a part of the Homecoming court.

During the match with DeSoto, Flieg served up an ace, Wehner recorded an ace block assist and provided two kills, Kreitler dished off 19 assists and Reynolds scooped up six digs. So all of them contributed nicely to the win.

Overall, the Dragons had a .186 attack efficiency, with Abby Moore and Dru Koetting both supplying five kills. Koetting also stymied DeSoto with her service game, recording four aces and going 16-of-17 from behind the line.