What made this convincing victory all the more remarkable, prolific Ste. Genevieve running back Zach Boyer didn’t play.

Others picked up the slack, including quarterback Aiden Boyer (who finished with 315 all-purpose yards), fullback Austin McBride (who also rushed for more than 100 yards) and wide receivers Payton Matthews and Bret Bieser.

“It was impressive, and it was nice to see everyone step up,” said Ste. Genevieve head coach Ken Weik. “It was a team effort.”

Weik wondered what kind of offensive output the Dragons would produce coming into the game. Well, he certainly didn’t need to worry. 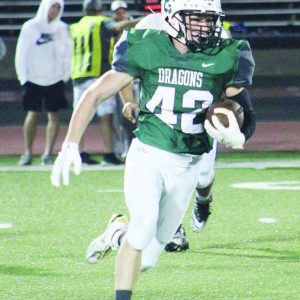 “It was a field position game, and our special teams also kept them (St. Pius) off balance,” Weik commented.

Ste. Genevieve’s offense showed it could churn out long drives, which in turn exhausted the Lancer defense.

St. Pius (2-3) scored first on a Nathan Ruble 1-yard run; however, the Dragons responded with next four scores — which included a 60-yard McBride TD, receptions from Bieser and Matthews and a short-yardage plunge from Aiden Boyer.

St. Pius drew within 14 points at intermission (28-14). But, Ste. Genevieve piled on its advantage in the third quarter with three more scores from Aiden Boyer, McBride and Matthews.

Aiden Boyer and Schwent capped off the victory with a 61-yard TD run and field goal, respectively, during the final salvo.