The Ste. Genevieve Parks and Recreation Board conducted a special meeting on Sept. 15 at the Knights of Columbus Hall.

At the conclusion of the meeting, the board agreed to break up a master plan for Pere Marquette Park – put together by Nick and Mary Donze with Donze Park Planning, LLC – into three distinct phases.

Each phase also was prioritized based on importance.

The general consensus was for Phase One to include the following amenities: walking trail, Adventure Playground and updating bathrooms.

Park board president John Conard, in a telephone interview with the Herald on Friday, said the walking trail was tops on his to-do list.

“Everything builds off that, all future phases,” he said.

Adventure Playground is a necessary early component of the plan, Conard said, in order to bring families into the park.

Aldermanic representative Ashley Armbruster presented the master plan at a board of alderman work session on Sept. 10.

“There was overwhelming support of the plan from the aldermen and city officials,” Armbruster said during the special meeting.

As stated in the Donzes’ master plan, all of the facilities in Marquette Park will be connected with a hard surface trail — allowing pedestrians access to every single nook and cranny of the facility.

The proposed new trail would deviate from the existing one, with a running slope not to exceed five percent. The trail is recommended to have a 10-foot width for a wide variety of uses, including walking dogs and rollerblading.

“The actual location will be engineered to assure compliance with all applicable standards,” explains the plan about the trail — which will include workout stations to provide well-rounded exercise options.

A natural surface hiking trail also is part of the master plan, built in part of the native prairie and wetland areas. This part of the park will be popular with “bird watchers.” There also will be interpretive displays featuring details on native plants and grasses.

Restrooms will be accessible from the trail system, as said in the proposal. Many on the board said the restrooms need to be larger and more accommodating. 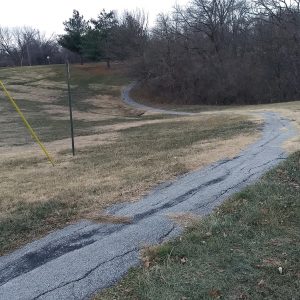