The Warriors piled on 63 first-half points en route to an easy victory over St. Vincent of Perryville at Father John Dempsey Field.

Valle Catholic’s first-half point total was the 13th most all-time in a single half in Missouri high school football history. The Warriors outgained St. Vincent, 451-85, with 263 of those yards on the ground.

“The offensive line had their most dominating performance (of the season),” Valle head coach Judd Naeger said. “We were able to be really balanced. We were also able to get in and out of different packages and groupings very well.”

Valle Catholic (3-0) will now play Orchard Farm for the first time in school history this Friday at 7 p.m. St. Vincent (0-1) will play host to winless Herculaneum. 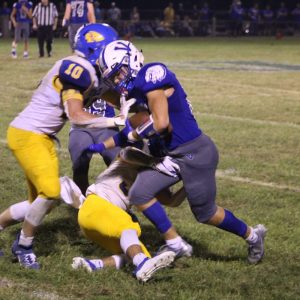 Aiden Heberlie dazzled in the game with a punt return for a TD, another TD receiving and an interception in which he cleverly jumped the route. He caught four passes for 101 yards.

“Aiden is an amazing athlete, and he can score every time he gets the ball,” Naeger said.

For the third consecutive week, Valle Catholic played a second half with a turbo clock. thanks to the state-mandated mercy rule.

That allowed Coach Naeger the opportunity to play most everyone, giving the Warriors a chance to fill up the stat sheet.

Like bananas, Valle Catholic scored in bunches — with Heberlie and Chase Fallert hooking up on the first TD in the game’s opening minute.

Jayden Gegg added one rushing and one receiving TD in the first quarter. Fallert scored on a 1-yard TD plunge.

Cory Stoll, Bryce Giesler and Carson Tucker joined in the scoring barrage in the second quarter with TD runs. Heberlie added his second TD reception of the game.

St. Vincent, a team which missed its first two games of the season due to the COVID-19 (coronavirus) pandemic, resembled a team that didn’t have much practice time recently. The Indians scored their lone TD in the second half.

The game’s final differential could have been even wider; however, Valle had a pair of second-half scores recalled by penalties.