Now, the Dragons can turn their focus to the Mississippi Area Conference-White Division slate.

Ste. Genevieve (0-3) will play host to Potosi with kickoff set for 7 p.m. Friday at Dragon Field. The game will air on Spectrum Cable Channel 991.

COVID-19 (coronavirus) attendance restrictions will be in place at Dragon Field, as established by the school district during a late August reopening plan.

“They throw the ball a bit,  but they are more of a running team,” said Ste. Genevieve head coach Ken Weik.

So don’t let the appearances fool you. Potosi features a spread offense, but the Trojans would rather get their running backs into space and create plays. 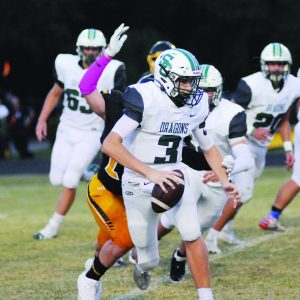 On defense, Potosi uses a four-man front — with the Trojans having a definitive size advantage on Ste. Genevieve.

“They have some really big defensive tackles,” Weik said. “It’s hard to run inside on them. You’re better off running on the perimeter.”

Potosi is coming off a 28-6 victory over Fredericktown. The Trojans’ lone loss this season was to Farmington (14-6) on Sept. 4.

The Indians scored on the opening kickoff as Bodey Ellis threw a lateral to Jordan Jarrett, who coasted down the sideline for the score.

“We were hoping we could get the look we expected (on the kickoff play),” Kennett head football coach Joel Wyatt told Dustin Ward of the Delta Dunklin Democrat.

“We worked on it all week,” Wyatt continued. “It’s really exciting when you execute it like you planned in practice. Bodey made a great throw, and Jordan got behind the wall and used his speed.”

The Dragons responded as quarterback Aiden Boyer connected with Bret Beiser on a 78-yard scoring strike. Ste. Genevieve missed the ensuing extra-point kick, and the score was 7-6 at the 11:23 mark of the first quarter.

Kennett proceeded to score the game’s next 42 points — with Daniel Boatman, Jarrett and Ellis supplying the offense.

Meanwhile, Ste. Genevieve punted three times and turned the ball over on downs twice during its final five possessions of the opening half. Weik said a second Dragon first-half TD was called back by a holding penalty.

Ste. Genevieve’s Anthony Nash prettied up the final score with an 11-yard TD run late in the fourth quarter. Bryant Schwent added the conversion kick to complete the scoring.