The adoption of the proposed budget was tabled until the special meeting on Sept. 24, to give the board a chance to look through it thoroughly.

The proposed budget featured total estimated receipts of $151,755 and estimates expenditures of $151,343. That would put the city in the black by $412.

With a police department and prosecutor being reinstated, $17,000 in municipal court fines were added to the anticipated revenue. 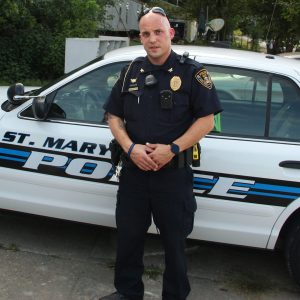 An ordinance repealing a 2019 ordinance that eliminated the police department, municipal court and prosecutor was passed unanimously.

New police chief Adam Bequette, meanwhile, was officially introduced as chief of police. Bequette is son of the late Mark Bequette, St. Mary police chief 2000-2016. He was the first police chief after the city eliminated the elected city marshal position in 2000.

Mayor Carlton Wyatt said Bequette will be working full-time for the Scott City Police Department and part-time for St. Mary

Wyatt also clarified that Bequette’s salary is $13.50 an hour, not $15.00, as one notice had indicated. Wyatt added, though, that if revenues allow, he could “move up pretty fast” to that figure.

“I guarantee people know we’ve got a police officer again,” Wyatt said. “We’ve got a few residents who haven’t learned it yet, but it’s getting out faster.

“I think we’ve got a good officer. He really is dedicated. He’s put in a lot of free time. He put in a  lot of time working on the police car.”

Wyatt also thanked the Ste. Genevieve County Sheriff’s Department for giving $1,500 for a new radio for the police car and the St. Mary Chamber of Commerce for giving $5,000 to support the police department.

Bequette said all the radar units have been calibrated and certified.

We shouldn’t have any issues if we went to court,” Bequette said. “We’re compliant with the attorney general’s office; we’re also compliant with Homeland Security and the department of defense. We’re just trying to get things back in order.”

He said he would be applying for three grants, totalling $15,000.

Bequette also reported he has investigated a case with controlled substances, and has addressed the owners of 804 Fourth Street regarding their numerous junk vehicles.

Curtis Picou the principle owner of the Lawbaugh Building was scheduled to speak at a public hearing about the building. He sent an email earlier that day, saying he could not attend.

Wyatt and the board members were not pleased.

“He said he would be here or he would have a member here tonight, and they’re not,” Wyatt said. “He had told me if he couldn’t be here, one of the guys would.”

Three large container units were put on the property, on top of water and sewer lines. No city permits were obtained.

Concern was expressed about the unsecured containers being in the flood zone, as well as on top of water and sewer lines.

Because the owners failed to get the required permits from the city, Wyatt said they have likely put the city in violation of Federal Emergency Management Agency (FEMA) flood plain rules.

After considerable discussion, the board voted to have the owner summoned to appear at the Sept. 24 meeting to explain the goings-on.

Another failure to appear would lead to tickets being issued.