IRONTON — This year, thanks to the COVID-19 (coronavirus) pandemic, cross country meets have shifted to what’s called a “wave start.”

“They are trying to have minimal runners at the start line,” Ste. Genevieve head cross country coach Sierra Boyd explained.

However, thanks to this new starting procedure, technology was somewhat compromised — and it took until Sunday evening until the overall results were finalized.

“I’m very happy,” said Valle Catholic head coach Samer Zoughaib said. “We had five boys run in under 20 minutes, and that was one of our goals. All of the girls ran well too.” 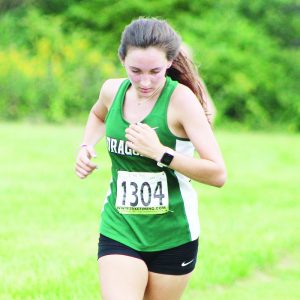 The course at the Arcadia Valley Sport Complex is completely flat, but the runners faced some challenges.

Boyd noted there is a significant ditch runners must cross and there also are a pair of quick switchbacks which might catch the competitors by surprise.

Many runners brought two different pairs of shoes because the grounds were covered in morning dew.

Valle Catholic placed seventh overall on the boys’ side with 173 points. The Jackson boys were tops with 23, which was 30 points fewer than Farmington.

Valle Catholic 2019 state qualifier Peter Roth clocked in with the Warriors’ best time in (19:02.04). However, only the top-30 runners received medals at this meet featuring a whopping 33 schools.

The Valle Catholic girls were fifth overall with 156 points. Like the boys, Jackson’s girls were the meet champions — but this was a taut affair. The Indians scored 39 points, just one point fewer than Farmington.