Both of them received gift baskets and hugs from teammates while their parents looked on.

“Both Hannah and Riley have been on the varsity team since their freshman year,” said Valle Catholic head volleyball coach Nancy Fischer. “Riley has been a solid outside hitter for us from the very beginning. Hannah came back strong last year, and is continuing to improve as a senior.”

Fowler missed her sophomore year due to an unspecified injury, and she played enough varsity matches as a freshman to earn a letter. Siebert has been an award-winning performer for the Warriors in recent seasons. Manager Kathryn Tague also was recognized.

Siebert peppered down nine kills while Fowler had three in contributing to the relatively easy victory.

Mia Weiler provided the Warriors with their most service points (nine). Hailey Weibrecht played solid on the front row with six kills and one solo ace block.

Setters Sam Loida and Makayla Joggerst combined for 22 assists while Rachel Blum propelled the Warrior defense with 13 digs — the only player on her team in double digits that night.

“Festus ran a 6-2 offense, so we were always dealing with three eligible hitters on the front row,” Fischer said. “Sometimes we had difficulty closing out blocks because we were determining where the ball was being set.”

Festus deadlocked the score at 21-all in the second set before Joggerst and Weibrecht teamed up on a block combination. Weibrecht then closed out the match with a thunderous cross-court kill.

“Jefferson plays tenacious volleyball and the players are technically solid,” Fischer said. “When we play a team like that, we have to control the tempo of the match and make sure that our energy level and commitment to play every ball is second to none.” 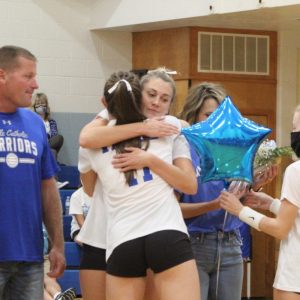