Despite suffering its first loss of the season last Wednesday to Windsor, the Ste. Genevieve High School volleyball team still had plenty to celebrate.

Senior setter Brittney Kreitler crossed an important plateau for players at her position — she registered her 1,000th assist.

“Reaching 1,000 assists is one of my greatest accomplishments in high school,” Kreitler said in an email to the Ste. Genevieve Herald. “I knew I was getting close, but I didn’t know they were going to announce in the middle of my game.

“I couldn’t have done it without my previous and current coaches and teammates,” Kreitler added. 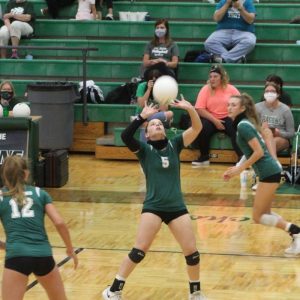 Ste. Genevieve’s Carla Basler has witnessed plenty of those assists as both an assistant, and now, first-year head coach.

“I am so proud of Brittney’s accomplishment of hitting 1,000 career assists,” Basler said. “An achievement like that couldn’t go to a more deserving athlete. She is a great leader and teammate.”

Kreitler nearly single-handedly kept the Dragons in the match against feisty Windsor, the school that eliminated Ste. Genevieve from the postseason in 2019.

Against Windsor, Kreitler used an aggressive jump serve to help make the first set competitive. She saved many passes that were tight to the net, and she also put down three kills — which energized the Dragons.

The first set was deadlocked at 23-all before Windsor won the final two points, with the 25th point on an unfortunate Dragon attack error.

Ste. Genevieve was up 18-11 in the second set thanks to a couple of well-placed tips by A.J. Prudent and kills from both Abby Moore and Tessa Grass.

The Dragons were still ahead 23-20 when Windsor won six of the final seven points of the match. A Moore tip tied the score at 24-all, but the Owls earned the win thanks to Sydnie Kube’s net play — including the go-ahead ace block.

Overall, the Dragons recorded a .163 attack percentage fueled by seven Grass kills and six each from Arie Taylor and Moore.  Libero Maya Watts paced the defense with 17 digs and teammate Elizabeth Basler had nine.  Kreitler finished with 26 assists.

“Windsor’s defense was very strong and they were able to get up many of our hits,” Basler said. “They also passed very well on serve receive, which is an aspect of the game that I didn’t think we did as well as we usually do.”