The Old Settlement Showdown is typically a game filled with drama.

There wasn’t much drama this year as Valle Catholic dominated cross-town rival Ste. Genevieve, 42-7, at Father John Dempsey Field this past Friday.

Valle now has a 31-26 edge in this popular intercity series, one of the longest rivalries of its kind in Missouri.

Because of COVID-19 concerns, the schools agreed to cap attendance at 1,000 spectators.

Ste. Genevieve head coach Ken Weik complimented Valle for its tough defense, which held the Dragons out of the end zone until Kaden Flye rushed in for a TD from 12 yards out with less than four minutes left in the fourth quarter.

“They have so much speed,” Weik said. “They are so quick to the ball. You think you have them contained, but someone else shows up. It’s their quickness that makes them tough to handle.”

Ste. Genevieve didn’t generate much offense, with much more success on the ground rather than through the air. The Warriors’ first-team defense held the Dragons to just 14 yards.

Weik said he was happy to see Ste. Genevieve cut down on its number of turnovers, which was seen as a step in the right direction.

“He (Chase) was able to make plays with his feet, and he also was able to extend some of our plays,” Valle Catholic head coach Judd Naeger explained. “He’s a smart kid.”

Aiden Heberlie, Austin Burnett and Cory Stoll all caught TD passes from Fallert. The Warrior attack also was helped with the addition of Jayden Gegg.

Naeger was pleased with the Warriors’ balance on offense; but, he said the rushing attack still needs attention as the offensive line understands its blocking assignments.

Valle showed its quick-strike capability in the opening minute as Fallert connected with Heberlie on a 68-yard TD pass.

Ste. Genevieve tried with might to keep the Warriors from scoring late in the first quarter. Valle had three chances on fourth-down-and-goal from the Dragons’ 2-yard line, cashing in on a Fallert-to-Burnett TD pass. 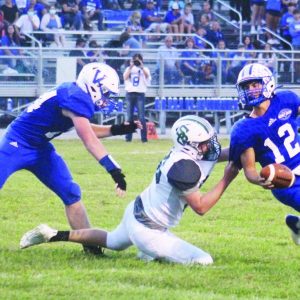