Valle Catholic High School football fans were not able to congregate on the field after last Friday’s game with Skyline.

That was just one of the new rules enacted to help prevent the spread of COVID-19 (coronavirus).

But, there was one undeniable tradition at Father John Dempsey Field — Valle opened another season with a convincing victory — 48-0 over visiting Skyline of Urbana.

The Warriors (1-0) won with a dynamic short passing attack and fast defense that bent, but didn’t break, in this whitewash win.

Save for quarterback Chase Fallert’s interception on Valle’s first snap from scrimmage, the Warriors accumulated 486 yards in total offense. Fallert finished with five TDs and 369 yards on 12-of-16 passes.

“The offense played well for the most part on Friday,” said Valle head coach Judd Naeger. “We had a lot of new guys out there. Once we shook off the nervousness, and got into the flow of the game, we allowed our ability to take over.”

Defensively, Valle Catholic surrendered 257 yards — but more importantly, no points as the Warriors begin a hopeful march to what would be their 16th Missouri State High School Activities Association state championship.

“The defense played fast all night,” Naeger explained. “We had some breakdowns at times in coverage and gaps, but we communicated well.”

Linebacker Austin Burnett was all over the place with seven solo tackles, two tackles for loss, one pass defensed and one quarterback pressure.

Most of the second half was played using the running clock rule after Cory Stoll and Fallert connected on a 69-yard TD strike. The Warriors continued building their lead throughout the contest. 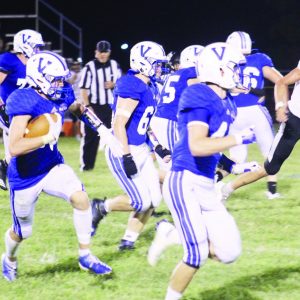