SPECIAL TO THE Ste. Genevieve Herald

The Ste. Genevieve High School football season-opener against the Festus went much like the 2020 calendar year so far.

Nothing seemed to go right as they fell 41-13 Friday night at Dragon Stadium.

Ste. Genevieve committed seven turnovers in the game — including on three consecutive possessions in the second quarter — and the Tigers capitalized on nearly all of them to give their new head coach A.J. Ofodile, a former NFL player, his first win with the program.

Ofodile spent the previous four years as tight ends coach for the Missouri Tigers, where he also played college football as a tight end.

The young Dragons, who only have four returning starters after graduating 22 letter-winners from an 8-4 district runner-up campaign last season, scored first when sophomore Zach Boyer punched in an 8-yard jet sweep with 7:01 remaining in the opening quarter.

After that, the Tigers gathered up all the gifts the Dragons gave them and scored the next 41 points, including four TD in the second period, and never looked back.

Sophomore Aiden Boyer had a brutal night with five interceptions in his varsity debut at quarterback.

“You are not going to beat a good football team anytime that happens,” said offensive coordinator Ryan Weik, who coached the team on the field while his father, Ken, was in the press box. “It’s hard to win ballgames when you turn the ball over like that.

“Young kid, you know, working hard, trying his best,” Weik continued. “But when one (interception) happens and then we’re trying to force the ball downfield to get back into the game, that’s a lot for a young kid. A sophomore in a spread system, that’s hard for a kid, especially when we rely so much on him. He was up against a senior-loaded defensive team out there. He did his best.”

One of those interceptions was a pick-six late in the second quarter by Festus linebacker Austin Anderson, who scored three different ways in a matter of four minutes to close the first half.

His hat trick also included a TD rush and a scoring reception to give the Tigers a 34-7 lead at halftime.

That’s despite Anderson being limited in practice during the week due to a hamstring injury.

Festus kept lighting up the scoreboard.

Anderson caught a short pass from quarterback Cole Rickerman and rumbled 29 yards — battling with defenders hanging on him, and stretching into the end zone with 2:21 remaining in the half.

It wasn’t all bad for Aiden Boyer as he threw for 102 yards with a touchdown on 7-of-20 passing and added 19-yard run.

He found receiver Payton Matthews for what would eventually be the game’s final score, on a 16-yard pass with 3:40 remaining to ease up some of the pain. 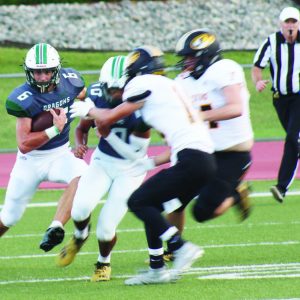