All was quiet at last Thursday’s special meeting of the St. Mary Board of Aldermen.

Two weeks  after a deputy had to be called following threats against the mayor and broken glass, the aldermen took care of a tax rate hearing and the regular meeting in about 16 minutes.

The tax rate remained the same as last year. Mayor Carlton Wyatt noted that the board can lower it without a public vote, but cannot raise it without one.

The biggest event was a total makeover of the board

Letters of resignation  had come in from both Clyde Cassoutt and Jennifer Schwartz. Cassoutt’s cited health issues and Schwartz’s letter said she had moved out of the city limits.

Karl Schultz was sworn in to replace Cassoutt and Ronnie Barnett to take Schwartz’s place. Annette Hacker and Dr. Zenon Duda remained on the board. 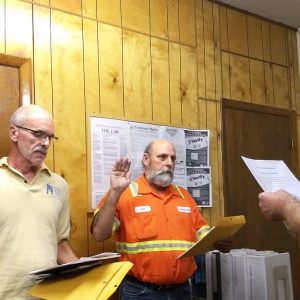 TAX RATE, SALARIES ARE THE SAME

The board then  pass ed an ordinance to set the tax rate  and another to set the salaries for the mayor and aldermen. It did not change. The only change was wording that indicates only one meeting can officially be held per night. For instance, under the old ordinance, they could technically have been paid for attending two meetings Thursday night, the tax hearing, and then the regular meeting.

“This does not change anything, as far as  salaries go,” Wyatt said. He explained that, “If you have three different things at night, it would be considered one meeting for the purpose of  pay.”

However, it was agreed to table the adoption of the city’s annual budget until the aldermen have a chance to look over it.

“I just put it on the agenda because I wanted to present it to them and get it to them and let them check it out,” city manager David woods said. “Check it out at your convenience. We can have a work session on it if you want. I just wanted to get it out.”

It was agreed that a work session will be held either before or after the September 10 meeting.

Duda asked if last year’s budget was available, for comparison. Woods said he would provide a copy.

The motion to adept the budget was officially tabled.