His work isn’t fingernails, rather it’s the disc golf course at Pere Marquette Park, which has been a fixture of the recreation center since 2005. 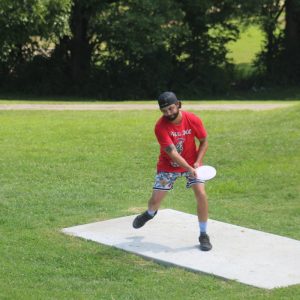 “It played beyond my expectations,” said Duvall. “I was worried how a couple of holes were going to play. But, it (the tournament) ran great.”

Duvall thanked Ste. Genevieve park superintendent Gary Roth for making sure grass was well-maintained — and alderperson Ashley Armbruster for serving as a spotter on tricky Hole No. 4.

“It was a pretty popular event,” said Armbruster during a park board meeting on Aug. 25. “There were a couple of golfers on the wait list. Members of the community came out to watch, and I’ve received positive feedback.”

Armbruster serves as a liaison between the park board and the board of aldermen.

There were four aces during the tournament, and the general consensus was pro level players “were amazing to watch.”

Disc golf is a sport for most anybody regardless of your age, gender or body type, and it’s growing in popularity across the region.

“I want to thank Excitement Disc Golf for hosting the tournament,” said local disc golf thrower Steve Hoog. “Timothy (Wiegard) and Britany (Horn) did a wonderful job of running it, and thanks to all the players for coming out.”