The purchase includes four Lucas 3.1 chest compression systems and a McGrath MAC EMS video laryngoscope. With it, plus a four-year service and maintenance agreement, the total purchase price was just over $68,000.

The chest compression unit allows CPR to be administered better and ore safely by ambulance personnel, while the laryngoscope allows obstructions in the airways to be checked our without staff having to be face-to-face with the patient.

Both qualify as COVID-19 purchases since they allow ambulance personnel to care for patients with less risk of contracting the caronavirus or other diseases. The commissioners will check with attorney Ivan Schraeder to make sure the extended service agreement does not violate terms of the CARES Act, which has a December 31 deadline for payments. 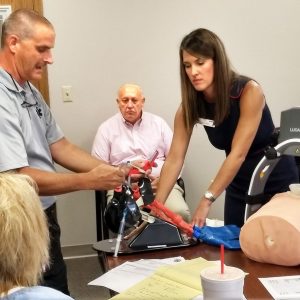 Dale Wright, District 116 State Representative, updated the commissioners on the status of the county license office. Wright called it “a comedy of errors” on the state’s part.

He said the Missouri Department of Revenue has gone through personnel changes and has fallen behind in evaluating applications.

The Ste. Genevieve Chamber of Commerce was one of five entities to apply for the contract to run the county license office. The office had been closed since mid March. Wayne Grusling opted not to reapply. His contract officially expired March 29. Grusling’s Vehicle Tax Services LLC had been operating the bureau since March 2016.

Presiding Commissioner Garry Nelson shared with him stories of elderly county residents who have been stressed out because their tags were due and they could not get them renewed.

Wright said he had spoken to the appropriate people two weeks before and had been assured that something would happen soon.

Nelson had been told that the personnel was bogged down going through the applications. He has noted though, that a  point system is used ad that with only five applicants, it should not be a long process.

Wright said he was told the analysis team had done an analysis of the bids and that it had been passed on to the purchasing teams.

He said a new form had been sent to the chamber, which requires certification that there is no “anti-Israel” bias on the part of the chamber.

Wright said he had been assured the contract should be awarded by about September 6.

When Wright first arrived, he thanked the county for its support in the recent primary election. Nelson replied that Wright has “done a lot for the county” in his two years in office.

CHANGE IN BRO WOULD BE BAD

The commissioners also let Wright know how displeased they were about changes taking place in the state’s Off-system Bridge Replacement and Rehabilitation (BRO) program.

Money in the past has come from the federal government, through the Missouri Department of Transportation (MoDOT) to each county for bridge and other road work. Now it will also be funneled through the state’s Regional Planning Commissions

“It’s bad,” Nelson said. “It’s taking money from us and running it through the RPCs.”

The county has used BRO money to replace a number of low-water crossings over the past several years.

“It’s one of the best programs the federal government ever made to help counties,” Nelson said.

Being run through the RPCs adds another level of paperwork and potential loss of local control. Nelson noted that highway priorities given to the Southeast Missouri Transportation Advisory Council frequently wind up jumbled after they are funneled through the RPCs.

Wright said he could meet with Patrick McKenna, MoDOT director, and discuss the situation.

Nelson said the changes will not take effect for a few months. He suggested inviting McKenna to the next regional county commissioners meeting. Wright asked if there was any chance of that meeting being moved to Jefferson City, to increase the likelihood of McKenna attending.

It was finally agreed that sending two or three county commissioners from the region, who are “well-versed” in the BRO program to visit McKenna might be the best move.

Road and bridge foreman Scott Schmieder reported that the crew’s oil pot had broken down. It was being repaired that day. They had been doing some chip and seal paving when it went down, he said.

Meanwhile, they have been using the Durapatcher to patch roads, including Dry Fork. They were also digging out bad spots on Saw Mill Road, he said.

Three Rivers Road, Hart-Pinkston Road and Paul’s Road will all get chip and seal work.

A text message that Hager Road was in “terrible shape” led First District Commissioner Randy Bahr to inspect it. He said it looked fine. Schmieder said he would take a look at it, too.

Brad Arnold, executive director of the Ste. Genevieve County Community Center, reported that he is trying to make plans for the fall. It is difficult, though, not knowing how the COVID-19 situation will change, he said.

“Will I be able to have a normal fall schedule?” he asked. He said that how the R-II and Valle Catholic schools make out in reopening classes will be the “biggest indicator” of how ne needs to approach the fall. He added that  “doing stuff inside the building is a whole different animal” than having outdoor activities. That makes volleyball, wrestling, indoor soccer and gym hockey leagues all questionable.