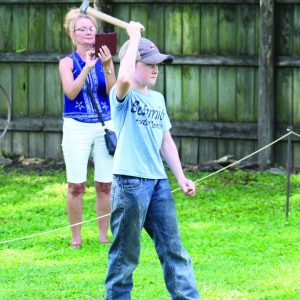 The fine art of tomahawk throwing is alive and well in Ste. Genevieve County.

And that’s what the sports editor learned on a recent, warm August afternoon at Hands-on History at the Linden House here in historic downtown.

The learning center had its first-ever tomahawk throwing competition during the recent “Saturday Showcase” that enticed heaps of visitors to see our landmarks and participate in activities that are second nature to the natives.

“I think it’s amazing all the people that came out,” Huck said.

More importantly, this tomahawk throwing event is one more way to preserve the French colonial history so richly ensconced here.

Huck said contestants were given three practice throws, and then 10 competition tosses.

The beauty of tomahawk throwing is simple; it’s either a “hit or miss” proposition. Yes, “X” marks the spot.

“If you hit, you knew you were going to be eating,” Huck said with a laugh,”and if you missed, you weren’t.”

Tomahawks have been used from age to age, since prehistoric times according to information gleaned from wikipedia.com.

The implement was further developed in 3rd Century AD by the Franks.

During the formation of Missouri, tomahawks were used by hunters as well as fur trappers – glorified by the character of Pasquinel in the Robert Michener book “Centennial.”