All three requests for certificates of appropriateness were granted by the Ste. Genevieve Heritage Commission on August 17 with virtually no discussion. The entire meeting took just over 12 minutes.

First, the Elaine Akins to construct a deck of the rear of a house at 505 Memorial Street.

Commission member Lee Ann Waldvogel asked Steve Akins how far off the ground it would be. He replied that it would be 16 inches “at its deepest” point. She also asked whether it would be visible from the front of the house. He said it would not be.

A motion was then made and seconded to approve the application. It passed unanimously.

As the Akinses left, Waldgovel remarked that “The addition of a bedroom looks really nice” and called it “a neat little house.”

Next on the agenda was a mural project on the south side of the Anvil Saloon at 46 S. Third Street. Artist Joy French, who pained the Ste. Genevieve mural on the union hall on Forty Street in 2019, had previously been granted permission to restored the ghost of a billboard image on the  side of the old blacksmith shop on Washington Street.

French again spoke to the commission about this project.

“On the side of the building is an old billboard for the Sells Shoe Company,” French said.

She gave some history on the shoe company. It originated in Chicago in 1870, founded by German immigrant Morris Sells. At one time the company employed 1,500 workers and sold shoes in over 20,000 locations across the country, cranking out 12,000 pairs of shoes per day, at its peak.

The murals, located all over the U.S. – especially in the Midwest, were painted, beginning in the 1870s and have now “ghosted,” or faded to where only a faint image is visible.  It later became the Royal Shoe Company. She added that the company went out of business during the Great Depression.

“What we would like to do is restore the mural that is there,” French said. “It is going to be a blue background with the letters, outlined and shadowed in black.”

An image of a shoe and the company slogan, “The Sole of Honor” will also be restored.

She noted that local historian Bob Mueller had shown her a photo of the building from 1904, in which the sign is visible.

Waldvogel complimented French on her union hall mural, adding that she had heard=many favorable comments on it.

It was also passed unanimously

“It currently has an asbestos tile roof that is in need of replacement,” Fischer said. “I want to replace it with something that would be the period that the house was built in, which would be the 1920s.”

She said it was similar to a roof Al Keiser had installed at 198 S. Second Street, as well as a house on Market Street. She said an exposed fastener roof, a style that has generated considerable debate among the commission members in the past, “would not be of any interest to me at all.”

“I want it to look authentic,” Fischer said. She added that she plans to bring a plan to the commission later this year to redo the front porch, “and get it looking more like a 1920s” home.

Waldvogel asked if she had a contract yet for the job. Fischer said she had a proposal for the project but had not signed a contract.

She said the proposal included removal and disposal of the asbestos material that meets local and Environmental Protection Agency guidelines.

“I think it will be nice,” Patterson said.

A short discussion was also held on how to honor log-time commission member Frank Myers, who was absent that evening.

“It occurred to me that maybe we should make some sort of recognition for Frank,” Waldvogel said. “He’s been doing this for a long time and he’s had a big hand in developing Ste. Genevieve all over. It would be nice to do something – a small plaque or something.”

Myers, 90,  dates back to the original Ste. Genevieve Lankmarks Commission of the 1980s.

It was agreed that a plaque will be presented to him at the next meeting. 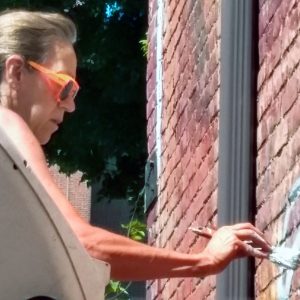