Even on Monday morning, there may be some skepticism whether high school football games will begin this Friday.

But, there they are on the schedule as Ste. Genevieve prepares to face Festus at Dragon Field and Valle Catholic entertains Skyline in a match-up of longtime playoff foes at Father Dempsey Field. Both games kick off at 7 p.m.

While breaking down offense, defense and special teams may be important to the games itself, crowd control is the “topic of the moment.”

Nix said he distributed tickets to coaches and athletes. The tickets themselves are

On Sunday, Nix drove to Festus to deliver tickets to athletic director Eric Allen – giving the visitors their share of limited tickets.

This is all a part of the second version of the Ste. Genevieve R-II School District Reopening Plan released to the media last Friday.

According to plan literature, each athlete will be given 4-5 tickets to hand out to family and friends.

Visiting schools, like Festus, will be designated the same amount of tickets as Ste. Genevieve.

That means the capacity for Friday’s game will likely be about 800. Dragon Field’s capacity is reportedly 3,500 spectators, so the cap is roughly at 22.8 percent.

The plan indicates masks will be required when people enter and exit the facility, and other transition times such as a trip to the restroom or concession stand.

Fans will not need to wear masks while seated rooting on the team. Families are urged to sit together and be socially distant from other families and visitors (six feet apart).

Students are asked to sit with their families, since “student sections” will not be allowed at this time.

“Every fall, we are scrambling to get ready,” Nix said. “But, our work has doubled, from administration to the custodians and the teachers.”

People will not be checked for body temperature prior to this Friday’s football game. There is a concern over the accuracy of thermometers for screenings outdoors.

The volleyball capacity in both Peggy J. Johnson Gymnasium and the new Ste. Genevieve Middle School Gymnasium will be about 300, Nix reported.

Recently, Nix watched as one of the Ste. Genevieve custodial staff fogged his office.

If there’s one thing the pandemic has taught Nix, now in his 12th year as AD, is never to take sports for granted.

In addition, Ste. Genevieve volleyball dropped out of a jamboree scheduled for last night at Valle Catholic.

“It’s extremely difficult to maintain social distancing in our gym, and probably in almost any gym around here,” Fischer noted.

Fischer reported she will be in contact with the Ste. Genevieve County Health Department this week to see if any additional restrictions on fans should be in place before the Warriors’ regular-season home opener on Sept. 1 versus Perryville.

In addition, Fischer said on advisement of the health department, volleyballs have been disinfected after each practice – and the weight room equipment such as benches, bars, weights and boxes used for plyometrics after all training sessions.

Upon entrance to Valle’s gymnasium, spectators and team personnel will be greeted by a sign full of COVID-19 information – and patrons may be subject to a temperature check.

Opponents played all of their sets on the same side of the court, meaning teams won’t have the traditional change of benches. Parts of the gym will be roped off. The stage will be used as a “social distancing” area.

Spectators were given three select seating areas inside the gym.

So, what about the big inner city football game on Sept. 4 between Valle Catholic and Ste. Genevieve?

Miller said capping attendance at football games and volleyball matches will be made on a case-by-case basis.

Even with all that’s transpired during this pandemic, Miller is pleased to see sports return at Valle Catholic.

“Most of our athletes are two-sport athletes,” Miller said. “…this enhances their academics as well as physical and emotional well-being.”

“We will continue to provide our families with updates as we receive additional information from the Centers for Disease Control and our local health department,” said Ste. Genevieve R-II district communications director Bailey Otto in an email to the Herald.

During a recent school board meeting, Dr. Julie Flieg praised the district’s ability to livestream events, reporting some of her family watching all the way from Texas.

“Brentwood is moving to the alternative fall season in March and April, therefore, they are not playing any fall football games,” Nix said. 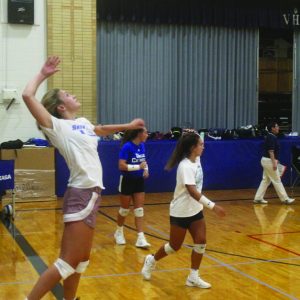