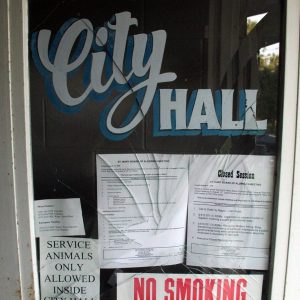 Debate over changes to the city of St. Mary’s utility vehicle (UTV) ordinance took a back seat to a shouting match between Anthony Bader and Mayor Carlton Wyatt, an apparent threat, property damage and charges being pressed during last Thursday night’s St. Mary Board of Aldermen meeting.

The board was about to vote on the UTV ordinance late in the meeting, when Bader  made a request.

The two tried to talk at the same time, when Bader accused Wyatt of pointing his finger at him.

“You’ll be out of here,” Wyatt warned.

“Go ahead, throw me out, Bader yelled, adding an expletive.

The two again tried to talk over each other.

“Got it,” Bader said, heading toward the door, then pointing at Wyatt. “You’ll get it, I guarantee you.”

“I’ll be waiting on you,” Wyatt replied.

Bader then slammed the door, shattering the  glass.

It was later noted that the glass could possibly have been damaged earlier in the meeting when Doug Louderback also stormed out of the meeting after arguing with Wyatt, and slammed the door.

“I would like to see a mechanical arm or something here for instances like that,” Placke said a few moments after Bader had left. “I’ve had him come in here several times and scare me half to death.  And, if I call county down here and I  have to go through dispatch and everything else, it can take them 30 minutes to get here.”

“I know what you’re saying,” Wyatt said. “I’m working on getting a police department. I am working on that.”