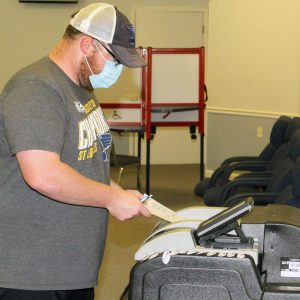 Ruzicka, who trailed Republican opponent Don Kuehn earlier in the evening, rallied to beat him in a tight race, 615 to 564, or 52.2 percent to 47.8 percent.

In the First District Democratic primary, meanwhile, challenger Karen Stuppy knocked off incumbent Randy Bahr, 428 to 345, or 55.4 percent to 44.6 percent. This gives Stuppy the office, since there is no Republican opponent in November.

“It feels really good. I’m still trying to soak everything in that I won,” she said. “I’m super excited and have a lot of emotions: excited, nervous, ready to get started. It’s going to be a new experience, but a good experience.”

Stuppy said she does not have any pet projects or immediate, specific items she wants to tackle.

“Not specifically,” she said. “I think I need to get in there and see how things are going and then see what I think could possibly be done, and just move Ste. Genevieve in the right direction, as far as progress goes, and like I stressed before, retail stores, new businesses, whatever we  can do to generate tax revenue and have things to do, entertainment-wise, for our families, and make our community a better place.”

Ruzicka said he wasn’t too stressed early in the evening, when Kuehn led. A 41-33 advantage in absentee ballots helped Kuehn establish the early lead.

“Sure, I was concerned, but I had a good feeling about it overall,” Ruzicka said. “I was pleased with the results.”

“We’re just going to keep working like we have been and try to get out there,” Ruzicka said. “The environment is difficult to get out and meet new people, but we’re going to do everything we can to build on what we’ve achieved. We’re hoping for the best.”

Ruzicka made up that ground with an overwhelming 172-56 margin in the Ste. Genevieve South precinct. He also won Zell (49-27).

On the Democratic side, Rousey did his best in Ste. Genevieve, where he lives,winning the North ward 43-24, while Ritter took the South ward 62-49.

Ritter said he hadn’t know what to expect, going in.

“You never know what’s going to happen in an election,” he said, “especially in a primary, where not that many people show up to vote. It worked out pretty well.”