More than 1,200 people watched the live=stream broadcast of the 2020 Candidates Forum, jointly sponsored by the Ste. Genevieve Herald and the University of Missouri Extension Service on July 29.

Due to COVID-19 restrictions, the decision was made to hold the forum via Zoom. It went off with only minor technical issues.

The first segment of the forum featured District 116 State Representative candidates Dale Wright [the incumbent] and his challenger in the Republican primary, Bryant Wolfin.

The second segment featured the six candidates running for the two associate county commissioner positions on this year’s ballot. This included First District Democratic candidates Randy Bahr [the incumbent] and Karen Stuppy. In the Second District, incumbent Joe Gettinger is not seeking another term. Democratic candidates are Micah Rousey and Tony Ritter, while Don Kuehn and Randy Ruzicka  vied for the Republican nomination.

Wright, 69, a  medical equipment executive, had defeated Ste. Genevieve resident Bill Kraemer to earn his first term in the state house in 2018. Wolfin, 29, is an area businessman and former Ste. Genevieve alderman.

Wolfin argued that he is more of a solid conservative than Wright, while Wright touted experience and maturity.

“I feel like I’m the more conservative voice; that’s why I’m doing this,” Wolfin said. “If I felt like Dale and I were two sides of the same coin, there would be no reason for me to run.”

He felt there was a reason because “ I believe we disagree on core fundamental principals of mine, one being taxes an and another one being small government.

“I think, when it comes to that,I believe I’m the more conservative candidate.”

While thanking Wright for being “gracious” to him during the campaign, Wolfin said he had knocked on “thousands upon thousands of doors” and had found that voters “want true conservatism, they want small government and they want less taxes. I think I’m the  person that best brings that voice to Jeff. City.”

“Bryant keeps saying he’s more conservative than me,” Wright countered. “He’s really not. I’m about as conservative as you’re going to find.  That said, I also think you  need to represent all the people, all the time, regardless of their party. So I do have an open door. I listen to anybody and everybody.”

He also focused on experience.

“This isn’t about me;  it isn’t about Bryant,” he said.  “It’s about the people we serve. I really do believe that experience counts.”

In addition to 47 years in the business world in three in Jefferson City,  he touted  “relationships with  the governor, with the lieutenant governor, with the speaker. Those are very important when you’re trying to get things done for the back here. And again I have a maturity level that will continue to support all the needs that our people will have. So I appreciate the opportunity.”

He suggested that it is not time for a change.

“Bryant’s a good young man. I don’t think he’s ready yet,” Wright said. “I think you need to keep me in there for a little while.” 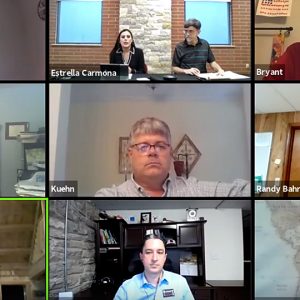 HAVE BEEN AROUND COURTHOUSE

“I really would like to comment on my other two commissioners that I worked with,” Bahr said, referring to Presiding Commissioner Garry Nelson and Second District Commissioner Joe Gettinger. “I think we did a lot of good things over the last nine years when I worked with them. I want to continue doing that as much as possible. I think I stayed true to my commitments over the last nine years. I want to continue to keep doing that.”

Stuppy, as associate county clerk, has also been involved in the county’s operation.

She also stressed her union background.

The biggest field, of course, was for Second District Commissioner, with both primaries having two-person races.

On the Republican side, Kuehn said his business experience will help in a wild time of pandemic shutdowns.

“I want our county to continue to be the great place it is to raise a family,” he said. “The is getting a little crazy in places. We need good people with business experience, family values and good old-fashioned commons sense to step up and get involved and keep our communities safe and prosperous. I have that experience, those values and that common sense to get the job done.”

“I have 21 years experience in building roads and bridges,” he said. “I know that’s  not the whole job; it’s a part of the job. But it’s an important part and I’m the one with the experience to build roads. I’m not afraid to work long hours. I’ve worked long hours my whole life. I will put in the work, what ever it takes. I also have experience working with the Corps of Engineers on levees, which is important for Ste. Genevieve because they’re protected by a levee.”

Rousey, who followed Ritter in the closing round, immediately argued that  such experience was not necessary.

“I want to address experience,” he said. “We have a roads department. I think that’s one of the areas where we don’t really need experience in the commission. We can rely on our roads department for that.  What we don’t have is a technology department. And, particularly in this pandemic, I think it’s easy to see that experience in technology is a valuable resource. I think that’s one of the advantages to having me serve in the role of commissioner.”

He also stressed his pro-union stances.

“Our unions are still under attack,” he said. “Our local economy is absolutely supported by unions and if they collapse, so do we. After Missouri voters overwhelmingly shot down Right To Work –  our county especially – the Republican governor tried to get counties to enact Right to Work individually We need a commission to take bold action against that.”

Rousey also  went over his plan to have a business incubator program to help spur economic growth.