Ste. Genevieve was rocked by a sudden storm about 2 p.m., last Thursday. County emergency management director Felix Meyer said he had been told it was a microburst, which is defined as is a localized column of sinking air (downdraft) within a thunderstorm and is usually less than or equal to 2.5 miles in diameter..

No tornado funnels were sighted and Meyer said the damage was consistent with straight-line winds. Just how many miles per hour those winds were traveling, Meyer hadn’t heard as of Saturday.

Large trees were uprooted, a few landing on houses. Meanwhile, the outer roof on the old Bilt-Best/Lucent building at 10th and Market was heavily damaged. 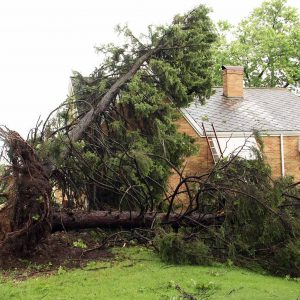 ed by heavy rain, which inundated low-lying areas around town. Meyers said it popped up quickly, virtually out of nowhere.