Major Jason Schott of the Ste. Genevieve County Sheriff’s Department, who is also president of the county’s Senate Bill 40 board, dealing with the county’s special needs population, was honored recently for his work.

District 116 State Representative Dale Wright presented Schott with a certificate of appreciation at a surprise reception July 21, organized by the Ste. Genevieve Chamber of Commerce.

“I wasn’t even aware it was going on,” Schott said later.

Schott, who became involved in the county’s special needs community after the birth of his son Braden, has been instrumental in the construction of the Braden and Friends Challenger Playground and Challenger Field, both designed to allow children with various needs to use. Both have been enormously popular not only with locals, but with out-of-county visitors.

He has also helped create Common Grounds Coffee House, where special needs individuals get a chance to gain work experience and to intermingle with the general population.

“When Dale asked me to help gather the information for him I was honored to assist,” said Dena Kreitler, executive director of the chamber. “I’ve known Jason for around eight or nine years and I believe he is the kindest, most compassionate person I know.  His love for his community and the people in this community is what drives his dedication, it doesn’t get much better than that.

“I can’t wait to see what his next project is and I hope I’m lucky enough to be a part of it.”

“It truly is an honor,” Schott said. “I’m honored to be recognized in all the stuff I’ve been recognized for all the projects I’ve been involved in, but all the awards and the honors I’ve gotten truly goes to the community and to the people of Ste. Genevieve County. They’ve always supported whatever idea I’ve concocted in my head or my wife comes up with or anybody, for that matter, that is trying to better and promote the community.

“The citizens in the county  and the city as a whole has always backed, if they’ve seen a purpose in it. We’re fortunate. We built the ball field, we did the playground, we did the coffee shop, and it’s all stuff that benefits the community as a  whole.

“For me being honored, I’m humbled by it, but truly the honor goes to the community.”

“The work he did in getting the Challenger ball field and Braden and Friends Challenger Playground built was outstanding, as well as the Sunshine Enrichment Center and Common Grounds, which gives people with special needs a great opportunity to meet the public and learn skills.

“He’s a person you’re proud to have on your team.”

Schott, though, is quick to credit the community for backing the various programs.

“Ever since I really got into that area, when I joined Senate Bill 40 after we had Braden and I got into that world of individuals with special needs, they’ve always supported me and always tried to do what they could to make sure that community of citizens are taken care of and are given what they need to help thrive and be productive,” he said. 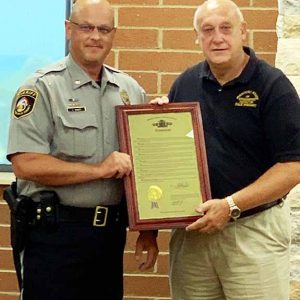