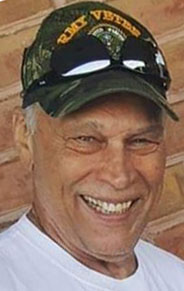 Richard Valentine Winters of Saint Peters, Missouri, passed away at the age of 72 on Wednesday, July 15, 2020. He was born February 14, 1948 in Ste. Genevieve. He was preceded in death by his parents, Thomas and Philomena “Mena” Winters, and his brother, Thomas Winters.

Rich was a veteran of the US Army and completed one tour in Vietnam, earning two Bronze Service Stars for his bravery. He retired from National Geospatial-Intelligence Agency [NGA]. In 2008 he went to Iraq and then to Afghanistan in 2011 in support of the troops and to manage the quarters and needs of the weary NGA travelers going in and out of the country. He was a member of the American Legion and VFW Post 2866 in St. Charles and loved to work out at the St. Peters Rec-Plex. For fun, Rich enjoyed karaoke singing spending time in his yard, and golfing, but above everything, Rich loved spending time with his grandchildren. He will be dearly missed by all who knew and loved him.

Memorial contribution in Richard’s name may be made to St. Jude Children’s Research Hospital.