A month after the city’s mayoral race ended in a 37-37 tie, the first meeting of new Mayor Carl Wyatt’s third tenure also saw the annual vote to elect a president of the Board of Aldermen/mayor pro tem finish in a tie last Thursday night.

The meeting, which saw the board deal with two troubled properties in the city after city manager David Woods swore in Wyatt as mayor, had other moments of drama as well.

Gloria Bader, outgoing mayor, who had lost a special June 30 election to Wyatt, 58-45, made some closing remarks, complaining about a letter Wyatt had mailed to local voters prior to the special election, questioning her judgment on several issues.

Bader spoke during the public forum section of the meeting, denying various allegations that had been in the letter, including her stands on cashing the city’s certificates of deposit [CDs] and the vote to eliminate the police department. 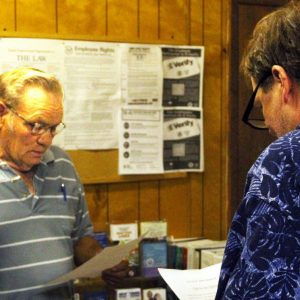