Yet another step is being taken to make the launching of Sainte Genevieve National Historical Park [SGNHP] a reality.

On Tuesday, Governor Mike Parson was expected to sign House Bill 1330, which includes material from District 116 State Representative Dale Wright’s original HB 2315, which allows the state of Missouri to turn property over to the National Parks Service [NPS].

Specifically, it authorizes state parks director Mike Sutherland to offer properties in and around Ste. Genevieve to the NPS for the purpose of establishing a national park.

The conveyance would certainly include the Green Tree Tavern, also known as the Janis Ziegler House. Built in 1790-91, it is considered by most experts to be the oldest surviving building in Missouri. Always privately owned until the past decade, it was given to the state of Missouri in 2017 and has been overseen by the Missouri Parks Department since then.

It is likely that the DeLassus-Kern House, west of town on Highway 61, will eventually join the Green Tree as an NPS possession.

“I’m excited about it,” Mayor Paul Hassler said. d“I’m hoping to see this park really gain some momentum and before this next election get it established.”

“This is another positive step toward the establishment of the national historical park, which will be a benefit for Ste. Genevieve and the region,” said Toby Carrig, director of tourism. “The National Park Service already has increased in presence here with a ranger at the Beauvais-Amoureaux House seven days a week, a ranger in the garden of the Jean-Baptiste Valle House, and programs such as goat yoga and bicycle rides to historic sites in Ste. Genevieve.”

The movement to get a national park established here goes back to the early 2000s and has included costumed visits by locals to the capitol building in Washington, D.C., congressional tours of local historical sites and more. 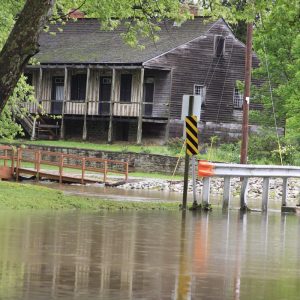