For the United States and virtually every other sovereign nation in history, that sovereign status came about and has been maintained by a strong military.

While divisions have arisen in the U.S. during the past 50 years over the appropriateness of linking patriotism with the military, honoring the nation’s fighting forces has never really gone out of style.

It never will if Geoff Giglierano and a band of local reenactors have any say.

French Colonial America [FCA], of which Giglierano is executive director, put on a living military history time line  to mark the Fourth of July on Saturday.

The yards behind the Louis Bolduc House and the Bolduc-LeMeilleur House was the scene of an interesting look at American military dress, equipment and traditions.

“There wasn’t really anything going on for the Fourth of July,” Giglierano said. “We decided this would be nice, positive event the whole family could enjoy.”

Members of the Ste. Genevieve milice or colonial militia, who interpret and reenact that and other historical eras, were happy to take part.

“These guys do a lot for us,” Giglierano said. “It’s nice to be able to reciprocate.”

The military actions that affected Americans were well-represented, from the French and Indian War [or Seven Years War], which reshaped the colonial landscape ad set the stage for the East Coast English colonies’ later rebellion, to the American Revolution, the War of 1812, the Civil War, World War I and World War II.

Even though French Colonial America generally focuses on the `750-1804 period that has given Ste. Genevieve its unique national significance, he believes the time line brings some important points to light.

“I like the time line thing because as time went on, everyone in the community wanted to be good Americans.” 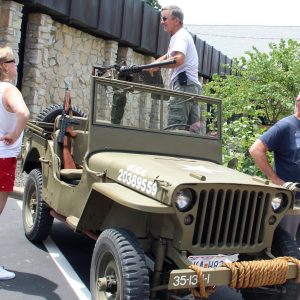 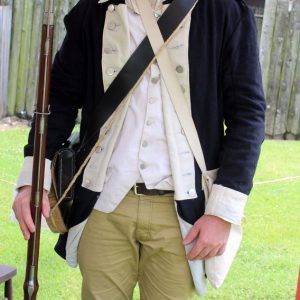