Sandra Bell feels she is leaving Ste. Genevieve County in a solid position.

She gave her final COVID-19 report to the County Commission last Thursday morning. That afternoon, she was asked to return to the courthouse, where a surprise farewell party was held, including ice cream cakes.

Ste. Genevieve County had 21 positive tests for the COVID-19 virus as of last Thursday morning. It still has only one death. Prior to that, with the county total at 20, the state had 22,283 confirmed cases, or 192 per county.

“I really credit you with our numbers being so low,” Presiding Commissioner Garry Nelson told Bell during her final report. “You put up with a lot of criticism and personal slander, but you kept our numbers down.”

Bell resigned in late June, on her doctor’s recommendation. She had served as executive director of the county health department since September 2009. She had been reporting on the pandemic twice a week to the County Commission since early March.

She has been credited by numerous local officials with keeping the number of cases in the county down by stressing the importance of basic precautionary measures, without going to excess.

“When you look at our county, compared to counties around us, look at the percent,” Nelson told her, “that was one-tenth of a percent when it was 18 cases. All of the counties around us are way over that. You took all the heat, you made your decisions. We backed you up, but you made the decisions and that’s one of the main reasons when everybody else was way over and we were down at one-tenth of one percent.”

Bell was criticized for moving too fast and too slowly, for being too aggressive and for not being aggressive enough in shutting the county down.

She advocated common sense as the most important component of keeping the county safe.

She still believes the county will be fine, “if people just use common sense.”

Other county leaders expressed appreciation for Bell’s work during the crisis.

“All of us that have these jobs, we get criticized for things day and night and second  guessed,” Sheriff Gary Stolzer told Bell. “It’s easy for that to happen. But nobody ever, ever can say you do not truly care about your community and your job. Whether they agree or not, you truly care and you are doing what you think is best for the community. I think all of us know that–even if we haven’t always agree with you. You were doing what you truly thought was best, and I thank you for that.”

“I support everything both Garys [Nelson and Stolzer] have said,” he said. “She’s always done a great job. I didn’t agree with her all the time, but she did what was right for the county.” 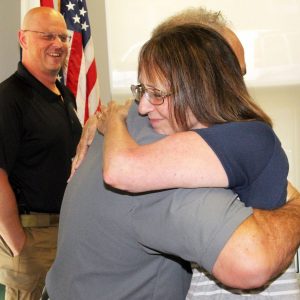