By Mark Evans
Ste. Genevieve Herald
A 15th COVID-19 case cropped up in Ste. Genevieve County a week ago, county health director Sandra Bell told the County Commission last Thursday. A16 positive test occurred last Friday.
Of the 16 cases, she said only three remained active. There had been one death, while the other 12 completed their 14 days in quarantine.
Bell did not feel one new case was sufficient to shelve her plans to allow the county to move into Phase Two, Step 4 of its reopening plan.
In Step 4, mass gatherings of up to 250 are allowed. Businesses may open to 100 percent capacity, as long as six feet of social distancing can be maintained, and schools may be reopened.
“Just because you’re opening up doesn’t mean people need to get elbow to elbow,” Presiding Commissioner Garry Nelson said.
Bell agreed.
“Exactly,” she said, “and we’re still going to recommend the same common sense precautions, hand washing, wipe off surfaces, stay apart from each other, wear a mask if you have any concerns, stay home if you’re sick. And, most of all, wash your hands. People still don’t do that; it dives me nuts.”
During the Monday County Commission meeting, when the count was 14 cases, Bell noted that that figure “isn’t bad, considering what’s going on around us.” Numbers have risen much faster in Perry, Jefferson and St. Francois counties.
“I would stay with our plan,” Nelson agreed. “We are doing well, compared with others. The waterpark opening should tell us a lot.”
The River Rapids Waterpark opened June 12 with a 50 percent capacity, or 600 people at one time.
It tends to take 10 to 14 days for someone exposed to COVID-19 to test positive.
District One Commissioner Randy Bahr said he had gone to a tournament in Perryville and was alarmed at the lack of compliance with COVID-19 restrictions. He said organizers of a recent baseball tournament in Bloomsdale had done a much better job, including wiping down each dugout between games.
Missouri had just under 17,000 cases as of late last week, with 946 deaths. 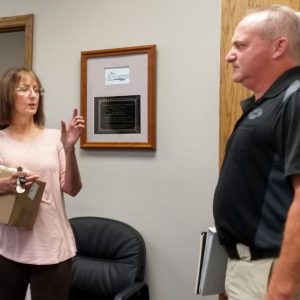 Bell said she thought a consistent message was needed and that June 22 had been the date given as the likely move to Step Four.
“There’s no need to change plans in the middle,” Felix Meyer, county emergency management director, agreed. “There wouldn’t be time to make plans by then, anyway.”
Then, after two more weeks without a spread, Phase Three, which would be a return to pre-pandemic living, would begin on July 6.
Bell will not be in her current position long enough to see the county move on to Phase Three. She recently submitted her resignation effective July 5, due to health concerns.
All agreed that Father Edward Nemeth, pastor of the Church of Ste. Genevieve, had done a good job at making the Valle Catholic High School commencement exercises safe.
Bell said that health department inspector Bob Kluender had walked the football field with Ste. Genevieve High School principal Chris Hoehne, to work out details on having a safe outdoor commencement  the following Saturday.
The waterpark had been a step behind the rest of the county, operating at 50 percent capacity instead of 75 percent. Ste. Genevieve County Community Center executive director Brad Arnold and Nelson agreed that the waterpark should move to 75 percent capacity when the rest of the county moves to 100 percent occupancy this week.