By MARK EVANS
Ste. Genevieve HERALD
Valle Catholic High School’s 42 graduates finally got to turn their tassels about a month after their scheduled 2020 commencement.
The rescheduled event took place Sunday afternoon at the Church of Ste. Genevieve, after a lengthy delay caused by the COVID-19 shutdown.
“What a glorious day it is,” Rev. Edward Nemeth said, “finally.”
Lauren Staab, one of three co-valedictorians, also quipped about the delay, saying, “Senior skip day went on a little longer than planned.”
Both local schools closed their doors in mid-March and concluded the school year with distance learning via the internet in mid-May.
Nemeth, church pastor and head of Valle Catholic schools, urged the class to make a difference. 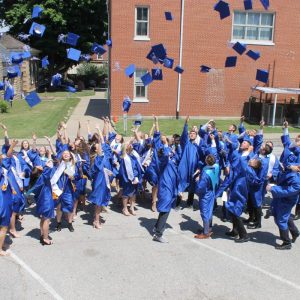 “You can go out these doors and transform the world,” he told the graduates, “a world that desperately needs transformation.”
He added that this can only be done “if we stay close to our Lord.”
Principal Greg Miller said that the seniors had acquired $1.84 million in scholarships.
All three valedictorians — Hannah Drury, Lauren Staab, and Mallory Weiler — spoke briefly. The trio divided their time with Staab focusing on the past, Weiler touching on the present, and Drury focusing on the future
Staab recalled how they entered high school as freshmen, coming from various grade schools. From the beginning, though, it “was like we found the missing piece to this puzzle we had been building the past eight years and now it was complete.”
She called the Class of 2020 “an unstoppable team.”
Weiler related how the seniors had to miss out on their final months in high school, from big events to little things like finally getting one of the senior parking spots. She proclaimed, though, that “This class, or should I say, this family, is more than strong enough to overcome these challenges and become even better, stronger and closer as a whole from it.”
Drury admitted that “the future is scary and daunting,” and that staying close to high school friends will be a challenge. She promised, though, not to forget any of her classmates. “Whether we barely talked, were on not-so-good terms, or became the best of friends, each of you and the memories you gave me will shape me into who I am meant to be in the years to come.”
Activities directors Nancy Fischer and Judd Naeger presented senior awards.
The “Three For Four Award,” for playing three different sports all four years of high school went to Lauren Staab, Bryce Gegg and Kyle Gielow.
The Outstanding Senior Athlete Award, annually given to a female and male athlete, went to Rachel Loida and Kyle Roth. Loida was all-state in volleyball and also stood out in basketball and track. Roth was a standout on the Warriors football and baseball teams and was honored by the National Football Foundation.
The prestigious Valle Girl and Valle Boy awards, for seniors who demonstrated an enthusiasm for helping others, in addition to maintaining academic excellence, went to Erin Mueller and Parker Skaggs.

Is it safe for Ste. Genevieve County to move ahead with its COVID-19 reopening plan?