A demonstrator stood near the intersection of Highway 32 and Highway 61 on Sunday afternoon while employees at Ste. Genevieve County Memorial Hospital watched the protest. (Photo by TOBY CARRIG/Herald staff)

Ellie Naeger feared that in a town 95.8 percent white, with only 1.6 percent of its population African American, it might be easy for the citizens to forget that “Black Lives Matter.”
That led her to help plan and organize a Black Lives Matter (BLM) protest along Highway 61 on Sunday, which was also her 17th birthday.
The event was part of a nation-wide backlash to a video showing the death of George Floyd, an unarmed black man in Minnesota, as one policeman held his knee on the back of the man’s neck for several minutes and three other officers watched.
More than three dozen people, ranging from high school students and parents to some former elected officials, braved nearly 90-degree heat and coronavirus worries, to spend some 2 1/2 hours standing along the highway’s intersection with Highway 32, holding signs and occasionally chanting.

See complete in the June 10 edition of the Herald. 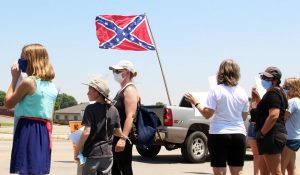 Black Lives Matter protesters watched as a pickup drove past, bearing a Confederate battle flag on Sunday. One other motorist shouted a racial slur. Most drivers, however, waved or honked to show support. (Photo by MARK EVANS/Herald staff) 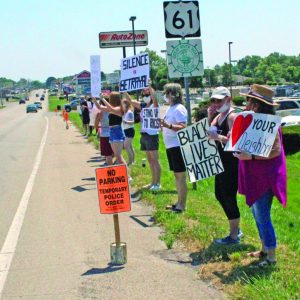 Protesters lined Highway 61 on Sunday afternoon to call attention to the racism following the death of George Floyd in Minnesota. (Photo by TOBY CARRIG/Herald staff)