After the Ste. Genevieve County Commission was not impressed with plans they had received from Poplar Bluff-based Smith and Company Engineering for a handicapped ramp and crosswalk for Progress Parkway, two representatives of the firm visited the site with the commissioners, Ste. Genevieve County Community Center executive director Brad Arnold, and city personnel on June 3. 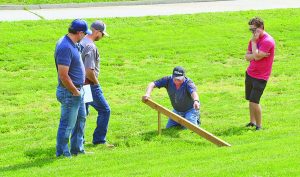 The elevation changes about 18 feet from the west side of the road, where the community center, Progress Sports Center  and Braden and Friends Playground are located, to the east side where the new River Rapids Waterpark is located.
The County Commission hopes the Transportation Alternatives Program [TAP] grant it had been approved for to build a pedestrian walkway over Progress Parkway can be adapted to a less ambitious plan.
The elevated walkway required an elevator because of the terrain. Wheelchair ramps would have had to have been between 150 and 200 feet long.
However, the elevator, which likely would have increased the project’s price tag from around $400,000 to well over $600,000 [with the county paying 25 percent of the total], proved to be impossible. In order to get funding, nearly 100 percent of the steel in the elevator had to be certified as produced in the United States. When none of the elevator companies interested in the project would attest in writing that the steel was entirely American-made, the elevator and thus the bridge were eliminated.
Presiding Commissioner Garry Nelson had asked the firm to draw up revised plans. Instead of Jeremy Manning, the county’s usual contact, however, someone else in the firm did the plans. Nelson was not impressed with the plan, which had a $212,000 estimate.
“There’s no way they could do it for that,” he said at the Monday meeting. “It drops 18 feet. You’ll need at least 180 feet of ramp.”
During the June 3 tour of the site with the commissioners, Dom Thompson of Smith and Company, who had designed the plans, agreed that they would have to be revised to take the elevations into account.
The plans will be revised to better fit the geography.

See complete County Commission story in the June 10 edition of the Herald.