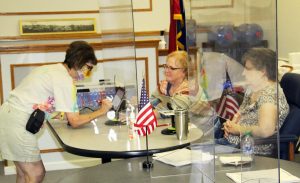 A voter signs in at Ste. Genevieve City Hall to cast a ballot in the Municipal Election on June 2.

Only 7.3 percent of registered voters turned out for the rescheduled Municipal Election on June 2 in Ste. Genevieve County. Originally scheduled for April 7, the election was postponed by the COVID-19 pandemic.
Incumbent Ward 1 Alderman Gary Smith easily won re-election in the only challenged municipal race in the city of Ste. Genevieve on June 2. Smith, in his third tenure as an alderman, defeated challengers Sam Ewing and Jerry “Lemon” Klein to win another term.