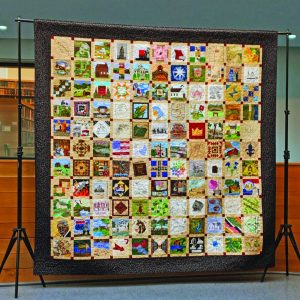 Missouri’s Bicentennial Quilt, featuring squares to represent each county and the independent city of St. Louis, will be on display at the Ste. Genevieve Welcome Center from June 11 to June 23. The Ste. Genevieve block was created by Linda Hermann. (Submitted photos)

The Missouri Bicentennial Quilt will be on display for the first time this week, making its public debut at the Ste. Genevieve Welcome Center.
The Missouri Bicentennial Quilt consists of one quilt square — 6-by-6 inches — selected from each of the 115 counties and the city of St. Louis. Each county square represents some unique characteristic of that area’s geography, culture, history. Quilters from the Missouri Star Quilt Company assembled the blocks into the finished quilt, which is being shown at various events now through the bicentennial celebration next year.
The quilt will be on display at the Welcome Center from Thursday, June 11, through Tuesday, June 23. The Welcome Center is open from 9 a.m. to 5 p.m. seven days a week and will host an evening hour from 7 to 8 p.m. on Friday, June 12.
The exhibit schedule has been altered this year due to the coronavirus concerns, but the quilt is making its public debut and will not be shown in the region again until December in Cape Girardeau County.
August 10, 2021, will mark the 200th anniversary of Missouri’s establishment as the twenty-fourth state to join the United States of America. At the request of the Missouri General Assembly, the State Historical Society of Missouri is directing “a statewide effort to promote and celebrate the State of Missouri’s rich and complex history.” 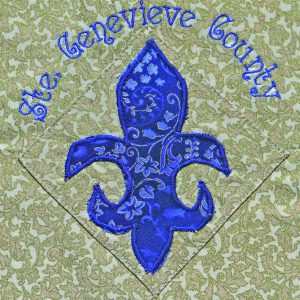