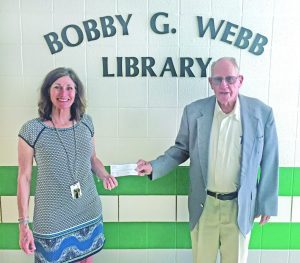 Robert and Peggy Webb have made generous donations to the Ste. Genevieve Elementary School’s library over the past few years.
Those donations have funded new book purchases for the students.
This year, the Webbs’ donation will go toward replacing some of those best-loved children’s books, including sets by award-winning authors.
The library is named the Bobby G. Webb library in his honor.
Webb was a teacher in the R-II School District from 1958 to 1970. He spent 28 years as a principal, both at Bloomsdale Elementary and Ste. Genevieve Elementary. He served on the R-II School District Board of Education from 1999 until 2011.
“The students are always excited to see what new books we have been able to purchase with the donation,” Ste. Genevieve Elementary School principal Geri Diesel said. “Mr. and Mrs. Webb’s generous contributions lead to so many smiles and help us to nurture a love of reading in our students.”
(Information in a release from Ste. Genevieve R-II School District.)