Parking on Dorlac Road near the Pickle Springs Conservation area took up a good portion of the Ste. Genevieve County Commission’s abbreviated meeting on May 26.
The regular Monday meeting did not take place due to the Memorial Day holiday, but the commissioners met for about two hours the next day to address a few issues.
The problem with parking near the conservation site was the chief among those issues.
Missouri Department of Conservation agent Rob Sulkowski, Ste. Genevieve County Sheriff Gary Stolzer and chief deputy Jason Schott all were present for the discussion. 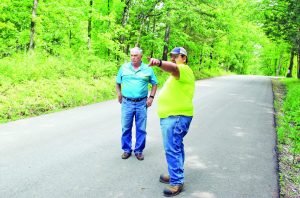 Ste. Genevieve County Presiding Commissioner Garry Nelson, left, and county road and bridge foreman Scott Schmieder examined a stretch of Dorlac Road near the parking area for Pickle Springs Conservation Area. Nelson would like to see the parking area expanded to allow cars to park there instead of along the road. (Photo by MARK EVANS/Herald staff)

Residents on Dorlac Road have complained about cars parking along the edge of the road, making it difficult to navigate. Residents  also said cars occasionally block driveways or turn around on private property.
The county road and bridge department had placed “no parking” signs along the road. It was reported, however, that the signs had been removed on one side of the road.
Presiding Commissioner Garry Nelson asked road and bridge foreman Scott Schmieder how deep he had driven the posts. Schmieder said they were at least two feet deep.
Nelson said he felt the county had three options.
One, it could block off part of Dorlac Road and abandon it, with the property owners on either side eventually taking ownership. The road runs from Highway 32 to Route AA.
Two, the county could abandon a section of the road and donate it to the Department of Conservation.
Or, three, it could do nothing other than continue to put up “no parking” signs.
The issue has come up before. The Sheriff’s Office is hesitant to begin having vehicles ticketed or towed — especially when the small parking areas at the wildlife area are full. On the other hand, the county is required to keep roads “free of obstruction.” Nelson argued that cars parked halfway on a road do constitute obstruction. It becomes even more of a problem if a wider vehicle like an ambulance or firetruck needs to travel through.
Nelson also said the Department of Conservation would be in better position to remedy the situation by expanding the parking area.

See complete story in the June 3 edition of the Herald.