Jami Inman, long-time Jour de Fete Committee president, hopes a 53rd festival will take place this year.
The catastrophic flood of 1993 has so far been the only event to cause cancellation of the celebration that began in 1966.
Inman spoke to the Ste. Genevieve Board of Aldermen last Thursday night to update city officials on where plans stood, as the world struggled to deal with the spread of the coronavirus known as COVID-19.
“We had a meeting last week, for the first time since everything’s been going on,” she said. “We decided to move forward with the thought that we would still have Jour de Fete.” 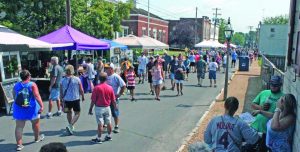 Jour de Fete brings many people to downtown Ste. Genevieve. Organizers are seeking input about whether to conduct the event this August.

She reported that a public meeting will take place at the American Legion Hall at 6 p.m. on Wednesday, June 3, to get community feedback on the issue.
“We don’t want to be the people that bring all these people into Ste. Genevieve,” she said. “So we’re hoping we have enough time [to make a good decision]. Jour de Fete isn’t until August 8 and 9.”
She said she hopes a good crowd will attend the meeting.
“We’re hoping to get some feedback from just the regular community,” she said, mentioning that she had already spoken to Mayor Paul Hassler and city administrator Happy Welch.
She said the committee will take a vote at the end of June or early July on whether to have the annual festival this year.
“We would like to have a definite decision by the second week of July,” she said. “That gives everybody a full month.”
Inman said so far only about 20 fewer vendors have prepaid compared to the same time in 2019.
“I don’t think that’s that bad, considering what has been going on,” Inman said.
In recent years, the festival has drawn about 150 crafters occupying 200 booths as well as 26 food and alcohol vendors. It takes place in Moses Austin Park and throughout downtown Ste. Genevieve.
Inman said a letter is going out to past participants to let them know the event may still be held. She also called local participants.

See complete story in the June 3 edition of the Herald.