Possible disaster was narrowly avoided last week in the restoration of the 87-year-old new home of the Ste. Genevieve Art Guild.
The old Ste. Genevieve Museum building, built in 1933 for the city’s 1935 bicentennial, was scheduled to have its roof replaced last week.
Tim Pekios of Midwest Environmental did the asbestos remediation and removed the original tiles before Carron Construction, LLC, of Bloomsdale began reroofing it.
Last Thursday, however, a subcontractor hired by Carron Construction walked off the job. That left the building — its interior recently remodeled with a new drop ceiling — vulnerable to water damage with heavy rain predicted for the weekend.
To further complicate things, Carron Construction owner Travis Carron was undergoing surgery that day. A frantic search took place to find a roofer to complete the job on short notice. 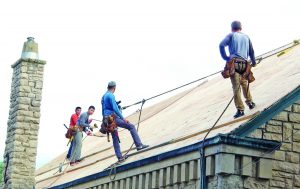 Workers for Melvin Mills Roofing LLC in Fredericktown, a subcontractor for Carron Contracting LLC, completed the roofing job on the old museum building on the Courthouse Square last Friday. The building is being used as an art center by the Ste. Genevieve Art Guild. (Photo by MARK EVANS/Herald staff)

Melvin Mills Roofing, LLC in Fredericktown agreed to do the job the next day.
But when forecasts changed to predict rain Thursday evening, that created another problem. It was decided that two large tarps would be placed on top of the building until the new roofers began work. County employees used a bucket truck to get one tarp in place.
They were in the process of trying to secure a second tarp when Ste. Genevieve County Presiding Commissioner Garry Nelson opted to call it off.  Nelson said he was concerned about the workers’ safety.
Also, another change in the weather forecast removed the likelihood of rain Thursday evening.
Friday morning, the new crew showed up as promised and completed the roof job before the projected rain arrived.
“We were very, very lucky,” Nelson said of being able to secure the roofers. “They had just finished a job and were planning on having a four-day weekend, with the [Memorial Day] holiday. But, they were willing to come in on short notice and do the job for us.”

See complete story in the May 27 edition of the Herald.