With the COVID-19 pandemic dominating the news, the Mississippi River has not received the attention it usually gets during the spring.
So far this year, the river probably would not have commanded as much focus as normal anyway.
After a May 4 crest of 28.67 feet, the river dropped below flood stage, falling to 24.5 feet by May 11 according to the gauge at Chester, Illinois. 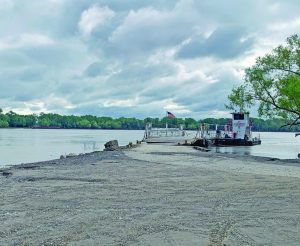 The Mississippi River, shown on Monday morning at Little Rock Landing, had been falling recently but is now forecast for a crest of 32 feet this week. (Herald staff photo)

A crest of 32 feet is predicted for Thursday, May 21.
Minor flood stage is considered to be 27 to 35 feet at the Chester gauge.
Moderate flooding takes place at 35 to 40 feet, and major flooding being above 40 feet.
The Ste. Genevieve Urban Design Levee flood gates are closed at 35 feet, and Highway 61 at the bend in St. Mary is closed at 46 feet.
Between 25 and 27 feet is labeled the “action” stage. Below 25 feet is out of flood stage altogether.
In May of 2019, the river was above the 33-foot mark, on its way to a crest of just over 46.52 feet on June 11 — second highest in recorded history on the Chester gauge.
For four months, the river stage was at 35 feet or higher, including 49 days above the 40-foot mark. That had community leaders worried because the constant pressure against the Urban Design Levee put considerable strain on it.
That scenario does not seem likely this year, with the river expected to fall below 25 feet by May 25.