Unusual times as these call for some creative thinking.
With the school year altered drastically by the COVID-19 pandemic — students in the Ste. Genevieve R-II School District haven’t been on the campus since March 17 — the district’s commencement ceremonies also have been affected.
Ste. Genevieve High School is planning a June 20 ceremony for its Class of 2020, if crowds are able to gather in some form under guidelines being recommended by state and local health officials. A backup date in July also has been set in case the event is not able to take place in June. 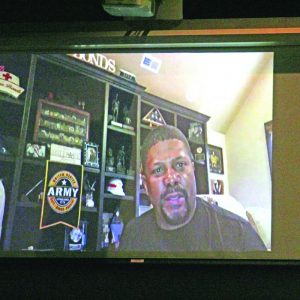 Kelly Bonds, retired from the U.S. Army and a member of Ste. Genevieve High School’s Hall of Fame, delivered an address via video during Saturday’s ceremony. (Herald staff photo) 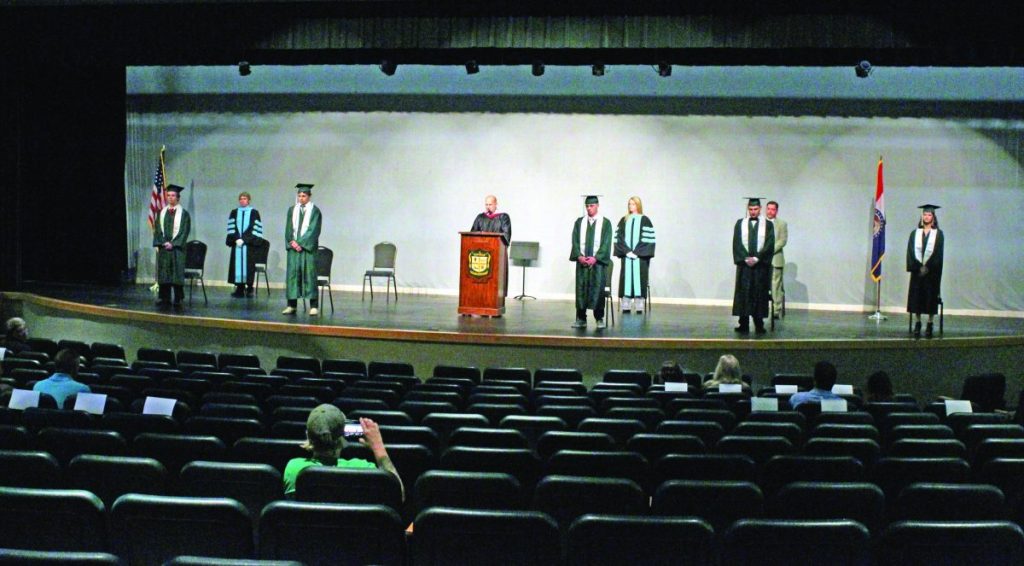 Above: Ste. Genevieve High School principal Chris Hoehne [at the podium] spoke during the commencement activities for graduates who will be going into the military this summer. Members of the Class of 2020 attending the ceremony were, from left: Joshua Hayward, Jesse Kemper, Nolan Klump, Clayton Kreitler and Genevieve Nickelson. Assistant principal Dr. John Boyd, R-II School District superintendent Dr. Julie Flieg and board of education president David Bova joined Hoehne on stage in conducting the ceremony. (Photos by TOBY CARRIG/Herald staff) 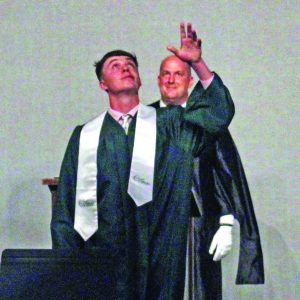 Nolan Klump led his classmates in turning the tassel and then tossing the caps as Hoehne watched.

But this past Saturday, on what would have been the normal day of graduation, Ste. Genevieve High School hosted a small commencement ceremony for eight members of the Class of 2020 who are planning to enter the military this summer. With the possibility those students could be at basic training by the time the delayed graduation ceremonies are held, district officials wanted to give the graduates the opportunity to don the caps and gowns and receive their diplomas.
Five students participated in the ceremony, as two already had reported for basic training.
In attendance were Joshua Hayward, who is headed to the U.S. Army; Jesse Kemper, Marine Corps; Nolan Klump, Air Force; Clayton Kreitler, Navy; and Genevieve Nickelson, Navy.
Caleb Miget (Marines) and Gage Wiegand (Army) already have reported for basic training. Jacob Smith, another Army recruit, was unable to attend.

The general public also was unable to attend. Eleven family members were in attendance at the Ste. Genevieve R-II Performing Arts Center along with administrators and staff members. In all, less than 30 people were in the auditorium.
The ceremony was also streamed live over the internet.
Fellow senior Kristen Parmeley, ranked among the top five in the class, spoke via recorded message. She thanked parents and family members for supporting students during a difficult time.
Kemper, who was recognized for  completing the qualifications of the A-Plus Scholarship program, led the Pledge of Allegiance. Klump led the small group in the changing of the tassel and throwing the caps.
The ceremony included a video keynote from Kelly Bonds, a retired U.S. Army veteran and member of Ste. Genevieve High School’s Hall of Fame, and an emotional speech from superintendent Dr. Julie Flieg, whose family includes many veterans and whose son entered the military after graduation.
“I thank you for joining the team that I served on for many, many years,” Bonds told the graduates. “It will be a game-changer but you will have zero regrets. It’s a big commitment, a huge sacrifice, and your family will sacrifice along with you on the time away from home, but the reward is priceless. Only 2 percent [of Americans] serve. The other 98 percent appreciate us, love us and support us for what we do. Everything is earned and nothing is given.”