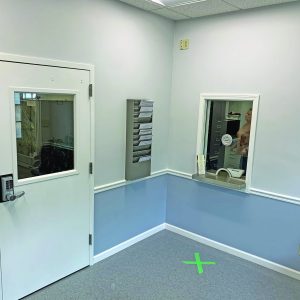 Ste. Genevieve City Hall  is open to the public for the first time in some two months.
On Monday [May 18], the lobby was reopened with up to three people allowed inside at one time. The limit allows social distancing to be followed.
The new vestibule inside the front doors of city hall includes a locked door and two windows to conduct transactions such as paying water bills or obtaining licenses or permits. The new system increases security for the city employees.
New city administrator Happy Welch reported that the lobby was “on track” for opening when he gave his first live city administrator’s report at last Thursday’s Board of Aldermen meeting.