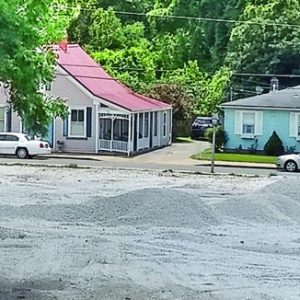 The former site of the County Services Building, foreground, on the near side of Market Street, shown last August following the buidling’s demolition, will be the site of a parking lot. Vern Bauman Contracting last week was awarded the contract to pave the lot. (Herald file photo)

Vern Bauman Contracting’s bid of $64,050 was accepted by the Ste. Genevieve County Commission last Thursday for the Market Street parking lot project.
Jokerst, Inc., bid $66,101, but Presiding Commissioner Garry Nelson stressed that the plan, not the final price, was the primary consideration. He had previously stated that the design would be they key to choosing a contractor.
During a pre-bid meeting, Jokerst personnel had stressed that the firm would not do a two-inch asphalt lot; it would need to be three inches thick. The county, however, decided that two inches of asphalt was sufficient.
Bauman went with two inches and also addressed the entrances to the lot, which will tie in with a larger existing lot located behind businesses on Market, Merchant and Third streets.
Both plans included removing and reconstructing the Market Street sidewalk.

See complete story in the May 13 edition of the Herald.