Outdoor tours of historic attractions in Ste. Genevieve’s downtown are expected to resume in June, as representatives of four entities and the city of Ste. Genevieve met last week to coordinate plans.
The city announced the plan on social media as well, noting that tour groups would be limited to 10 people at a time.
Chris Collins, the first permanent superintendent of the Sainte Genevieve National Historical Park, helped facilitate a meeting last Thursday among the entities involved: French Colonial America, Missouri State Parks, the Foundation for Restoration of Ste. Genevieve and the city as well as the National Park Service. 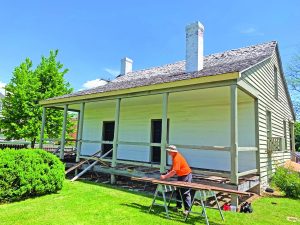 Dennis “Toupie” Huck removed nails from weathered boards removed from the back porch of the LeMeilleur House on the campus of French Colonial America last week. Huck and his son Noah have been working on both porches while the historic home at the corner of Main and Market streets is closed to the public during the coronavirus shutdown. The outdoor areas of French Colonial America is expected to open for tours in June as part of a plan for interpretation at various outdoor spots in downtown Ste. Genevieve. (Photo by TOBY CARRIG/Herald staff)

Historic attractions in Ste. Genevieve that were open through the winter closed during the month of March as the threat of the coronavirus spread forced the closure of businesses and agencies throughout the country. Park properties such as the Felix Valle House State Historic Site and the Jean-Baptiste Valle House gardens have been open for people to walk around, but the buildings have been closed.

They will remain closed to tourists in June, though the city of Ste. Genevieve’s Welcome Center is expected to open to provide public restroom facilities as well as services.
“Different organizations have picked a theme,” Collins said, “so we’re all trying to figure out how to organize that, and we’re going to meet in a couple of weeks.”
Collins said the organizations will meet every few weeks to discuss progress, “figure out an idea how we can work together and make something happen for the summer.”

See complete story in the May 13 edition of the Herald.