Artists from the Ste. Genevieve Art Guild brought home plenty of honors from this year’s recent Art Is Ageless competition, sponsored by Presbyterian Manor in Farmington.
Art Guild members won top honors in 10 of 11 categories.
The competition was created to offer artists age 65 and older the opportunity to share their work and to reaffirm the “agelessness of human creativity.” It is open to both amateur and professional artists.
This year, due to COVID-19, entries were submitted electronically and judging took place online, which posed some additional challenges according to Presbyterian Manor’s marketing director, Annie Allen.
Allen said most of the issues were technical in nature — including some entrants having difficulty making clear photographs of their work and some needing assistance with posting on social media or setting up a social media account. Others had problems connecting to the internet or figuring out how to cast their votes online. 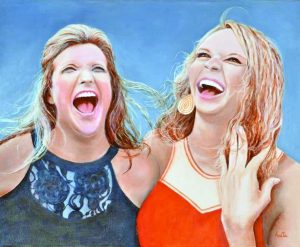 Anita Alsup of Ste. Genevieve won the People’s Choice award in the Art Is Ageless competition, sponsored by Presbyterian Manor in Farmington, for her painting called “Joyful.” She also won Best of Show for another piece, “Thoughtful.” (Image from Ste. Genevieve Art Guild)

Even the traditional — and highly popular — awards reception traditionally hosted by the facility had to be replaced with a virtual video awards ceremony. All the entrants were invited to tune in at 2 p.m. on April 24.
“It was like a watch party,” Guild vice president Juanita Wyman said.  “I set an alarm, so I wouldn’t miss it.  It was almost like being there, as we were able to congratulate each other with messages back and forth.
“We appreciate that Farmington Presbyterian Manor was able to think outside the box and allow us to have this show.”
During the online reception, Allen said she sent “heartfelt thanks to all the artists who participated for their patience as we were trying to figure out how to do the show with everything going on in the world right now.”
“The challenges were met,” she said, “and the competition was a success, drawing 68 entries from several surrounding counties, along with a lot of online interest because of our amazing artists. Your creativity and talent is truly inspiring.”
Winners of the local competition will compete with winners from 15 other Presbyterian Manors of Mid-America communities for an opportunity for their work to appear in the 2021 Art is Ageless calendar, which will be the 40th anniversary edition.
As in prior years, members of the Ste. Genevieve Art Guild garnered nearly all the top awards.
Best Of Show — Anita Alsup for oil painting, “Thoughtful.”
People’s Choice (Professional) — Anita Alsup for oil painting, “Joyful.”
Runners-up — Vada Galvan, Ethel Gross and Anita Alsup.
People’s Choice (Amateur) — Dorothy McClanahan.
Painting (Professional) — First place, Vada Galvan; second place, Linda Buis; third place, Vada Galvan.
Drawing (Professional) — First place, Victoria Cummings; second place, Juanita Wyman; third place, Juanita Wyman.
Photography (Professional) —  First place, Juanita Wyman; second place, Dianne Dickerson.
Photography (Amateur) — Third place, Iris Vincent.
Mixed media (Professional) — First place, Dianne Dickerson.
Scuplture (Professional) — First place, E. Dean Burns; second place, E. Dean Burns.
Christmas (Professional) — First place, Iris Vincent.
Christmas (Amateur) — First place, Dorothy McClanahan.
Alsup, a Ste. Genevieve resident, won the Best of Show for a second time in the competition. She previously won in 2016.
She said receiving the People’s Choice award for her painting ”Joyful” was particularly gratifying this year.
“COVID-19 and staying home can be very challenging,” Alsup said. “We experience many different emotions as our lives adjust.  A humorous story, a cartoon or joke can give us relief and laughter. ‘Joyful’ portrays two sisters, shoulder-to-shoulder, enjoying a good laugh. I hope that this painting makes viewers smile and cherish the joyful times.”
(Information in a news release from the Ste. Genevieve Art Guild.)