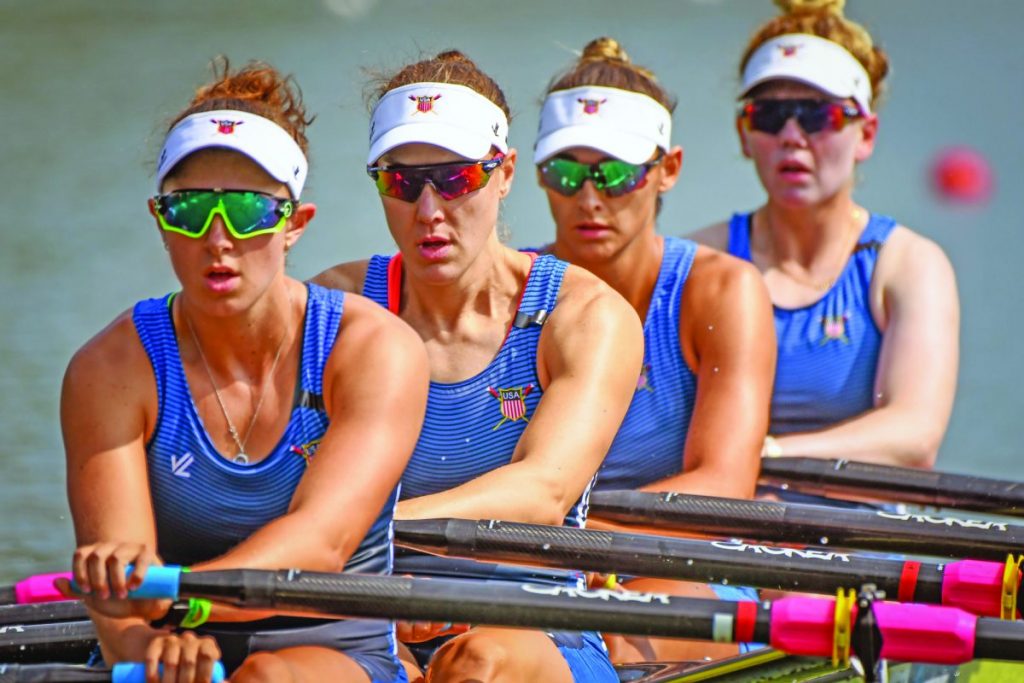 Emily Huelskamp, second from the left, was shown with her teammates competing at the 2019 World Rowing Championships. The U.S. quadruple [four-person] scull team finished seventh and qualified for the Olympics, though the members of the actual Olympics squad have yet to be selected. (Photo published with permission from usrowing.com)

Emily Huelskamp has competed in several prestigious rowing events during her career, but she still hopes to make one of the biggest events before she retires.
The Ste. Genevieve High School alumnus has been selected to the U.S. Rowing Team and has represented her nation in the World Rowing Championships.
“I was able to make another world championship team last summer in Linz, Austria,” she said in a recent interview. “That was an important event because the year before the Olympics is the qualification year. Countries have to place their boats at ‘X’ number of spots in order to qualify their boats for the Olympics at the World Championships. You’re always wanting to medal, you’re always trying to win, but there’s also the added pressure of qualifying your boat.
“There are other chances, but that’s the first step, and if you get your boat in then, then the athletes for your team are able to just focus on training for racing rather than training for qualifying. We were able to qualify. I was in the quad again this past summer, and we qualified it. We are happy with that. We didn’t place as high as we hoped, but we accomplished the goal of qualifying the boat, and that was the most important thing.”
The U.S. team finished seventh. Teams have to finish in the top eight of the event to qualify for the Olympics, but the individuals on those teams will be selected by their respective national committees.

Huelskamp said some factors include time on the erg[ometer], water time, how they row with their teammates and past performances.
“I have to try to earn my spot, but the boat is qualified,” Huelskamp said.
Due to the COVID-19 pandemic, however, all things have been put on hold as the Olympics have been pushed back a year.
“It was a pretty tough couple of days,” Huelskamp said when the decisions were being made to move the Olympics, which is being hosted by Japan, from 2020 to 2021.
“Fortunately, our team has been trained to adapt and kind of handle whatever is thrown at us,” Huelskamp said. “We have to work for whatever we get when we’re training. We’ve been taught to be adaptable from the beginning, so we’re very fortunate to have that. With that being said, it’s still tough when World Cups are starting to be canceled, you start to see countries dropping out and kind of read the writing on the wall as far as postponement is inevitable. We don’t know how long the postponement is or if it’s only going to be postponed or canceled. It was a pretty rough couple of days as far as not being sure what to expect and not sure what my next step might be.”

See complete story in the May 6 edition of the Herald.