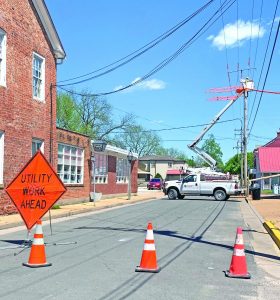 Citizens Electric Corporation crews closed off Market Street for parts of two days last week to work on a pole replacement project. The electric cooperative had its annual meeting on April 23, which was closed to the public due to the coronavirus and which included the announcement of a record return in the capital credits program. (Herald staff photo)

Citizens Electric Corporation (CEC) members will receive a record $4 million in capital credits in their bills in the months of May and June.
Operating as non-profits, electrical cooperatives utilize margins above expenses first for re-investment and then return excess funds to its members at the discretion of the board of directors.
Last year, CEC returned about $2.5 million to its members, given as credits in one month.
The corporation has been retiring capital credits since 1993, paying its members and former members from specific time periods. Up until 2017, those time periods had been 20 or 30 years into the past. In 2017, the board opted to pay more recent members in addition to past members.
The board voted in March to return $4 million in credits, but the official announcement was not made until the April 23 annual meeting.
In June of this year, residents and businesses among CEC’s customers in 1996 and 2018 will receive a credit on their bills. The total amount will be around $2 million spread over 27,000-plus members based on usage during those years. Large industrial members will receive a greater portion of the credits than typical residential members.
With the coronavirus pandemic likely causing economic hardships for some of its members, CEC this year is tapping into the credits from its power supplier, Wabash Valley Power Alliance (WVPA), of which CEC is a member.
In May, residents and businesses who were customers from 2007 through 2018 will receive credits on their bill due to CEC’s membership in WVPA. CEC joined WVPA in January of 2007, so those capital credits represent the first 12 years of CEC’s membership in the alliance.
“The board decided, with the situation we’re in now with COVID-19, let’s go ahead [and utilize the WVPA credits because] we know folks are going to be needing more money and are hurting,” CEC member services manager Steve Elsea said.
Capital credits typically have been paid out in August, but again the CEC board has changed that timetable to provide relief during the coronavirus.

See complete story in the May 6 edition of the Herald.