Christian Boyer has been a consistent presence for Ste. Genevieve’s boys basketball team over the past few years.
Recently he was recognized for his work in the classroom.
The senior was named to the academic all-state basketball team. 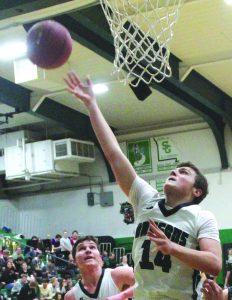 In order to receive the honor, a player has to be nominated by their coach, who must be a member of the of the Missouri Basketball Coaches Association. From there, in order to be eligible, a student-athlete must be a senior on a team in good standing, possesses outstanding moral character, a grade-point average of 3.25 or more out of a possible 4.0, and must have one or more of the following verified minimum scores — a composite ACT score of 27 or better, a composite SAT score of 1920 or better, or a PSAT selection index score of 185 or more.
“I’ve always worked hard in school, so to get recognized for it, I thought that was a pretty cool honor,” Boyer said. “Last year we had someone get it, and I was pretty sure I would qualify for it.”
“I think it’s a great honor for him,” Ste. Genevieve coach Rob Coleman said. “It’s not an easy thing to get. It shows how hard he has worked not only on the court, but in the classroom, too. Basketball is a long season with a lot of games, sometimes four games a week, and to be able to keep your grades up to that high of a standard is awesome. Along with getting such a high score on the ACT of 30, he is also first in his class out of 127.”